This past Sunday, we were talking about having a carry-in at church for lunch, but there were so many graduation parties the week before that it just didn’t seem to be feasible.  After church on Sunday, we got to talking about getting together some time this week, so we decided that it would be fun to have a picnic.  It has been a while since we’ve been together for something like that, and our pavilion really needed some activity.  (Actually, it needed cleaning before it had any activity, and Certain Man arranged for that, too)

So Certain Man and I got some hamburgers and hot dogs and I made some custard for the White Mountain hand cranked ice cream freezer, and had some help making five gallons of lemonade.  Gracegiven came in the afternoon, and lent a hand at sweeping the kitchen floor and helped to set up the pavilion.  Certain Man picked up charcoal and lighter fluid.  He got the pit ready for grilling and helped to set up tables.  He got his trusty utensils and his usual roaster pan for the hamburgers and hotdogs once they were grilled.  Friend Ruby showed up and scrubbed the very spidery ice cream freezer, (Shiver!) and other of the females helped to carry stuff out and set things up on long tables at one side of the pavilion.  We set up the six picnic tables in the rest of the pavilion and put chairs up around the fire ring out in the yard.

Around 6:30, people began to come in earnest, and what a lovely time we had.  It was an incredibly busy time, and I won’t profess that I sat very much.  In fact, neither Certain Man or His Wife could sleep for a while when they got to bed that night!  Whew!  We must be getting old, because our bones ached so much it wasn’t funny!  But worth it???  EVERY BIT!  And here are some pictures! 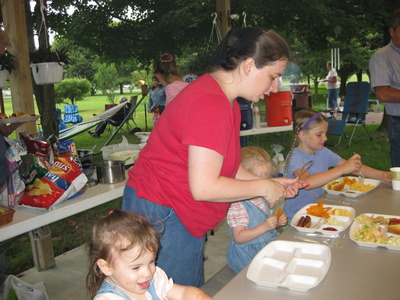 April — who helped to get ready, also helped to feed little ones before she got her supper. 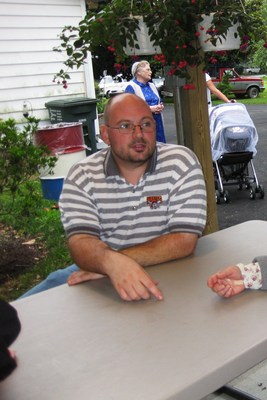 Jesse has a bad cold, so he hasn’t been holding his baby nearly as much as he (and Charis) would like. 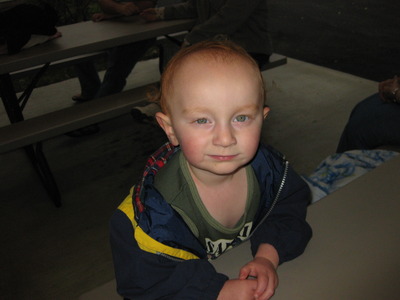 One of the reasons for the picnic was that Kurtis and Leslie Miller
were visiting Kurtis’ parents, Robert and Loretta Miller.
This is their little guy, Gabe. 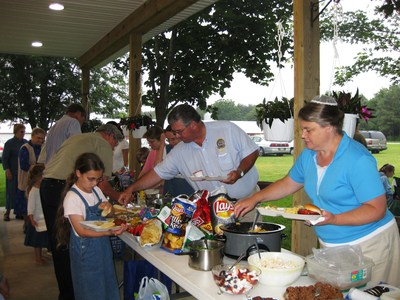 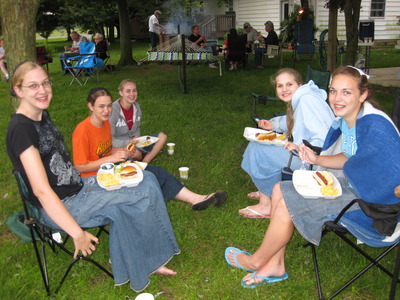 THE YOUTH GIRLS:
Mary Beth, Joanna, Laura, Ruthie and Amy
And yes, we are missing quite a few! 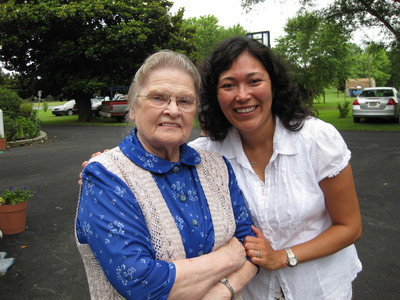 My Sweet Mama and my dear friend, Ada
(Ada is an aunt to our daughter in law, Jessica) 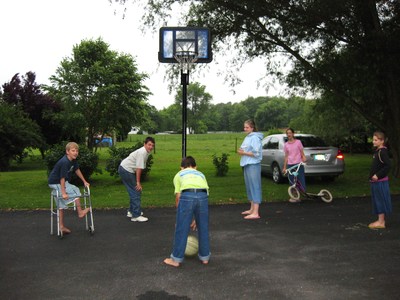 There will always be a basketball game somehow during the course of an evening. 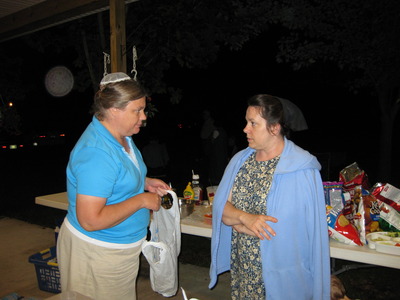 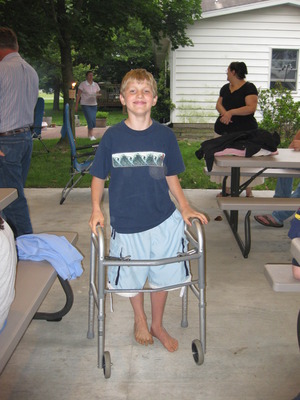 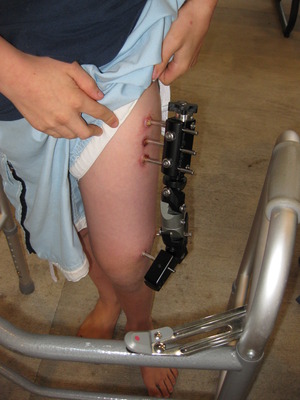 This is Daniel Hughes, a young fellow who got run over by a tractor earlier this year.  He has had this stabilizer on ever since, and it has certainly given a fair share of people the heebie-jeebies.  He got it taken off on Thursday, and is doing quite well. 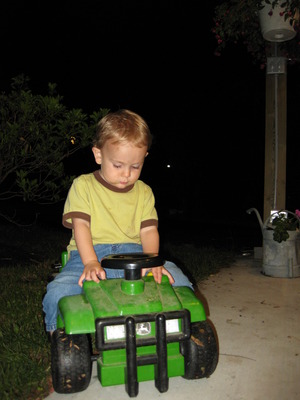 This is our Sammy-boy.  Ever the farmer, and the son of a farmer, He knows what this machine is good for! 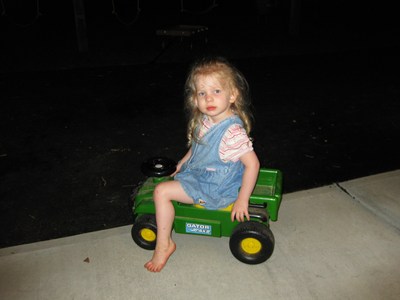 Victoria wasn’t at any loss either. 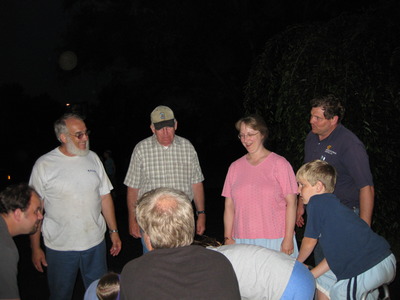 And finally it was time for ice crearm 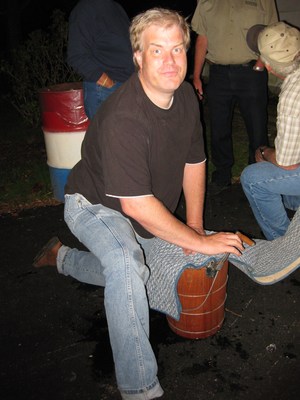 Kent did a lion’s share of the work.  It kinda shows on his face.
(Sorry, Kent!) 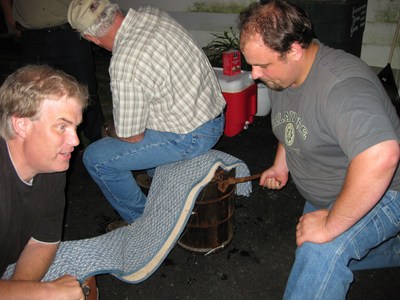 When Kent wasn’t turning the crank, Caleb was.
And John did his part at holding down the buckets as well as turning. 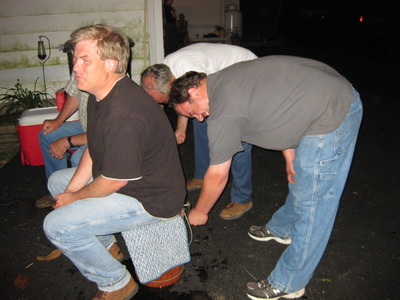 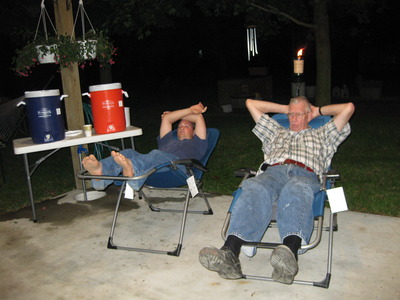 After all that work, I didn’t get any pictures of the ice cream eating.
Somewhere along the way, we got away with four and a half gallons.
Here Gary and Josh are trying out the “anti-gravity” chairs that I bought
for Daniel for Father’s Day.  They are pretty nifty, and feel especially good
on tired, old, worn out backs. 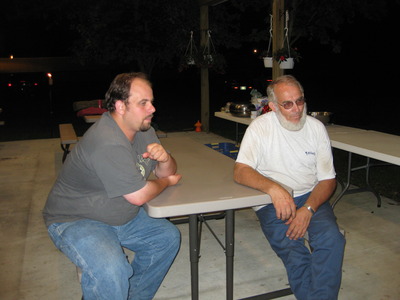 Caleb and Certain Man look on while the chairs get their approval ratings. 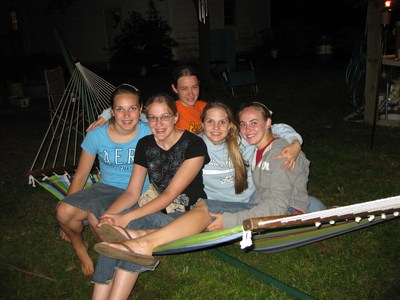 And then the girls piled onto the hammock to take a picture
“For Rachel” they say cheerfully, “and Beeba, too!” and I agreed to send it on its way.
Sure did make me miss my girlies, but it reminds me again that “Family”
is any group of people that is a part of our hearts.

So here’s to our church family.
I surely do love you each one.

And for Our Church Family and anyone else that is interested:

Stay tuned for the details about the July 4th picnic!!!
Make plans now to come.

Blessings and THANKS from
The Shady Acres Crew!