I’m going through my computer room, (Eldest Daughter calls it “purging”) –trying to find out if there are any real treasures there.

I came across an old photo album, full of memories and things that cause my heart to pause and reflect.  Here is a picture of my Precious Daddy and Sweet Mama that was taken sometime between Clinton’s wedding and Nelson’s wedding.  They were probably 41 or 42.  (Mama, Dear, you should have worn your spec’s.  Honestly, you look better to me every year! ) 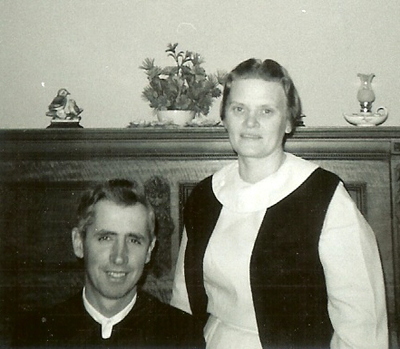 Last night, we had a call from Nepal!

This morning, Eldest Son was able to get some pictures sent: 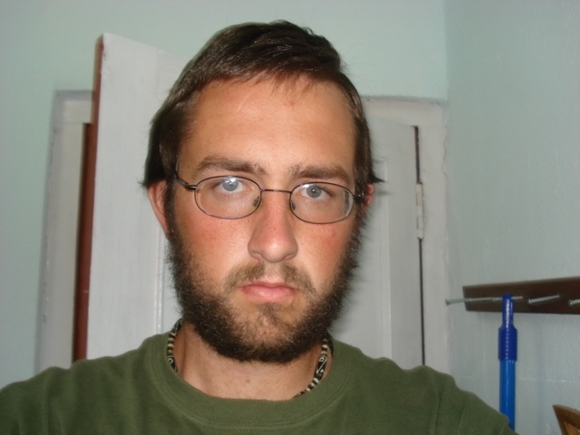 (. . . and his Momma is grateful.  She had worried that he might be
mistaken for a Tibetian Monk!)

This is the bridge that he talked about in the last post. 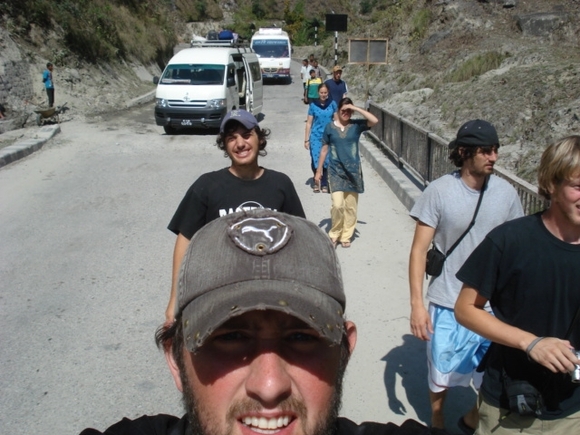 Because it was “cracked” the bus company made the passengers get off, walk across, and reload on the other side.

The country they were recently in is quite poor. 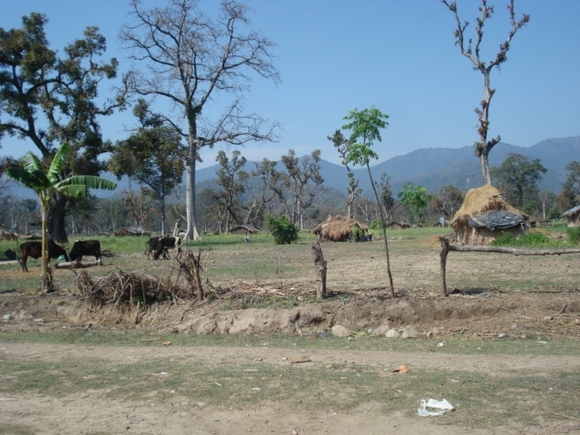 Raph says he would hardly call these things “huts” or even “shacks”. (It  seems those terms are a bit too grandiose for these pimitive dwelling places.)  It was for people in these economic conditions that they were digging wells last week.  He found it so exciting.  I am not surprised that he found the manual labor easier to enjoy than teaching (or treking, for that matter!).

And then this picture, which is probably my favorite. . . 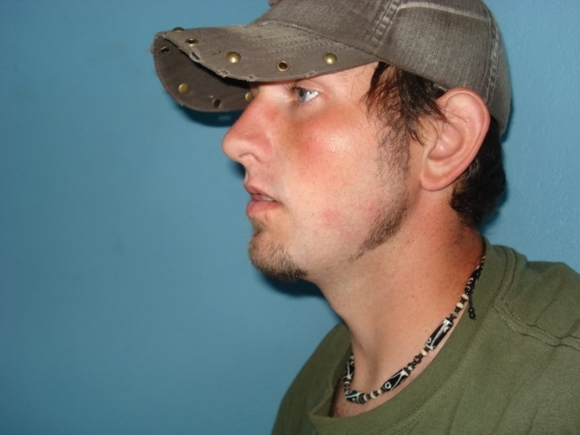 It was so good to hear his voice, and this morning, to get to see some current pictures.

News from Oldest Son in a far country  (Thank you, Lord Jesus!)

(These letters are even more precious to us because Raph never learned to type — So his method is “search and find” but I suspect that he is getting better at it as time goes on!)
Hey Momma,
Well we are back from the far west. We were only out there for 10 days instead of 2 weeks. So now we are back in Kathmandu for about ten days and then we go for our second trek. I’m not looking forward to that but it should be better then the last trek. We will have a local guide to go with us and its only for like 5-7 days. So hopefully it won’t be to bad.
Well like I said, we are back from the west. We rode like 12 hours the first day and stayed in a town called Kohalpur. Stayed for the night, got up the next morning and rode for 4 more hours to reach the far west, right on the India border. We stayed there for like six days and helped a group that someone knew put in 3 wells. It was great. We put 2 of the wells on landless ground. Landless ground is the ground that the government gave to the people who used to be slaves. The government freed the last of the slaves like a little over a year ago, I think. Not a 100% sure but I know it was recently.
So they live crowded in the areas with literally nothing but a shack/tent. It’s sad but there really isn’t much you can do. And it’s only getting worse because those people are having kids a they don’t have any land for them. A never ending problem. But it was a great experience for me and I was able to cross over into India for just a little. Barely but it still counts:)
After we were done in the far west we came back to Kohalpur for 2 days and put a well in there for a person that someone knows. It was a good trip and i was able to meet some new people. Good stuff. Well that’s about all that’s happening right now.  Talk to ya later.  Raph

This day was truly a gift from God — wonderfully relaxing, it was, it was!  And the women’s seminar on mentoring with Goldie Fretz this weekend is causing me to do great pondering!

The emphasis tonight was a quote from Howard Hendricks:

“You cannot impart what you do not possess.”

No School, so Youngest Daughter can sit with her ankle up when she needs to!

And there are no appointments, so I can mostly stay home!

And it is a beautiful day, so I hope to put some sheets on the clothesline to flap in the wind.

And maybe even pay some bills and do some house work.

Oh, and there is some friendship bread that needs baking.

(Seriously, if anyone wants some, today is the day to get it!)

I wonder what God has in store for this day!

This week has held:

Monday:  Laundry all day — And a lost insurance card for a vehicle that needed to go through inspection.  That wouldn’t have been so bad, but at the very same time a notice of suspension of licence (for an offspringin’) came from the bureau of motor vehicles for a fine that hadn’t been recorded as paid.  There was frantic searching, as CMW was sure that the fine had been paid, but she could find neither record nor ticket nor receipt and no one would answer the telephone anywhere concerning it.  This caused a great consternation, and CMW wondered if she were losing her mind in the fracas.  Adding to that was the fact that Certain Man took it upon himself to go through drawers and cupboards and desktop looking for the insurance card, and occasionally, CMW heard the shredder going and was greatly bothered by that sound.  “Whatever was he shredding????”  However, the magical hour of 4 o’clock came and the offices that wouldn’t answer were closed, anyhow, so everything would have to wait for the next afternoon.  There was a young friend who spent the day, and then a Leadership Team Wives’ meeting in the evening.  And so that long day ended.

Tuesday:  There were two Appointments for Our Audrey Girl — one in Seaford and one in Lewes.  And inbetween a visit to McDonalds that left CMW very, very sick for 24 hours.  She came home from the last appointment, called the out of state bureau that was asking for the license suspension, and found out that there had been a clerical error — the fine had been paid.  They faxed proof of it to the home fax machine, Certain Man took it to the right people and got that straightened out.  He also procured a new insurance card and got his dilapidated old pickup through inspection for another two years.  (Thank you, LORD!) CMW was quite aware through all these proceedings that she was feeling worse and worse, and finally took herself to the upper lair and threw up and went to bed before 5 pm. (This has to be almost a first.  She cannot ever remember a time of doing such an unheard of thing!) and stayed there until 6am the next morning (except for numerous fast trips to the restroom). Sometime after CMW went to bed, Youngest Daughter was out running, stepped off the pavement, turned her ankle and howled loudly until Middle Daughter heard her clear up in her bedroom and called for the assistance of Certain Man.  Certain Man assessed the situation, threw her over his shoulder and carried her into the house.  She was plunked on the La-Z-y Boy and assessed by her (almost nurse) sister and made comfortable for the night with ice and anti-inflammatory meds and her foot up.  Which is where Certain Man’s Wife found her the next morning.

Wednesday:  After an appraisal of the situation Certain Man’s Wife decided that Youngest Daughter really needed to get that ankle checked out.  So after the ladies were off and CMW had managed to sleepily get herself around, it was off the the emergency room.  And after a surprisingly short stay of only about an hour and a half, they were on their way again with an air cast and crutches and instructions not to put any weight on it for a week.  “A sprain,”  they said, “That’s all.”  CMW came home gratefully to her chair.  Her tummy still didn’t feel so great, and she was so sleepy.  Around 4:30, she realized that if she didn’t get the house straightened out for small group, it wouldn’t get done, so she bestirred herself and hustled about as fast as she could.  She motivated some helping hands and everything got ready in time.  Small group was well attended, and people went home in a timely fashion and so, looking blearily at the clock, she headed for bed by 10:30.

Thursday:  That would be today!   This is the regular Bible Study morning, but CMW had a mandatory medicine class at Stockley Center.  So while the girls met here, and went over their lesson, and settled the squabbles and heard about funerals for dead cats that had been found, CMW found herself in the medications class.  To be honest, it was the most enjoyable one she has been to for many a year, and the 104% on the test at the end of it was indicative of how many times she has had to take this material.  It got over early and she came on home — to find that the cord on her fax/scanner/printer had shorted out for good this time.  So she hopped into her car, took it to Radio Shack for replacing and found that it couldn’t be done.  It had to be ordered.  Maybe back ordered.  (BAD, BAD RADIO SHACK!!!  Why is CMW so loyal to you???)  While standing in line at Radio Shack, her cell phone rang and it was Youngest Daughter, asking for a ride home because she was so exceedingly weary after being in school all day with her crutches.  So CMW flew to the Center to pick up Our Audrey Girl, then drove to Greenwood to pick up poor crippled Youngest Daughter, and finally came home again to the house on Shawnee Road that really is her favorite.

And that is where she wants to stay for a while.  Hopefully all day Friday!

When days go wrong,
(as they sometimes do!)
And life is hard
(as it sometimes is!)
And the hurts in the hearts
of people I have chosen to love
Seem more unfair the longer I think about it
Then strangely, to my soul
Comes an ache, a longing, a homesickness.
I need to talk to my Dad.

But they aren’t Daddy.

(I wonder what he’d say to comfort me tonight.)