And then it occurs to me that there are plenty of humans out there tonight in that very circumstance —  dying.  With no one to watch over or care.

Do I seek them with the same heavy heart that I had when I was looking for my errant cat?

This e-mail came in a round about way to our family forum from someone with connections in China.  What an incredible answer to prayer for the many of us who have been praying!  Continue to keep this family in your prayers.

Chad called me from
Wenchuan a few minutes ago and wanted me to let you know that all is well with
them. They are living in a tent on the soccer field of the college there because
their building is damaged. Their house is still in good enough shape that he has
been able to go into it every day to sort of go through things and start packing
things up. They are basically just waiting till the road gets opened enough to
get a ride out…Chad said someone told him maybe 3 or 4 days but it could be
longer than that. Army trucks were able to get in through that road recently but
yesterday I heard that it had been closed again because of slides caused by
strong aftershocks. They have water and the basic things that they need, Chad
said it is sort of like they are living in a big refugee camp. He said that
everything is quite orderly around there with lots of army guys around making
sure people stay calm etc. Chad said it is very dusty around there because there
were major rock slides all around the area. He said it did rain some the first
evening and then all of the second day but since then it has been sunny.

that there has been word from Chad and Jenny and that they
are okay.

Lord Jesus, may it be so!

Could my Xanga Friends please pray for family members in the town of Wenchuan in the province of China that was hard hit by the earthquake?

Chad and Jenny Graber, and their little son, Matthew, are there. Chad is teaching at a college there, Jenny is expecting their second baby.  Their town is very devastated.  There has been no word from this little family.

Pray for their safety, yes, but pray more that they would be a source of hope and comfort to those around them.

And pray for my cousin, Ben, and his wife Carol, and the rest of their family as they wait for news from Jenny (their daughter) and her sweet family.

And as members of the Family of God, we should be praying for our brothers and sisters who have been affected by this disaster.  May we not sin by “ceasing to pray” for our troubled old world.

Just so you know, it is all gone from my freezer.

It became the stellar seasoned croutons
on a beautiful tossed salad
on the second course
of the main meal
last night
at the Jr. Senior banquet.

I cannot claim credit for their wonderful flavor.

One accomplished young cook,
namely Carmen Horne,
took that cubed up bread
and seasoned it
and toasted it
to perfection.

I promise you.
It did not
taste like donuts
when she was finished.

And my conscience is not fretting over the wasting of almost perfectly good bread.

What a wonderful solution to my problem.

Thank-you, Carmen and the Banquet Crew. 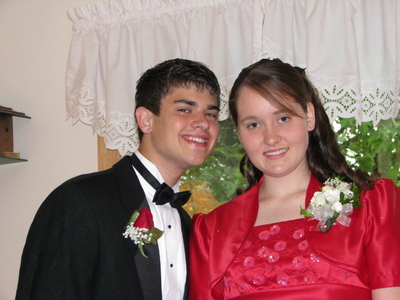 Her cousin, Tim, invited her many weeks ago, and she has been eagerly anticipating this night.

But then she got sick, and for a few days, it was a big question about whether she could even go or not.

But she recovered, and she was resplendent in her pretty dress:

She is slouching here just a tiny bit so she isn’t taller than her escort —
(but he doesn’t care, and she shouldn’t either!)

I was already out at the school, working on supper,
and didn’t get to see the great goings on that involved betting ready..

Deborah did her hair, and it turned out nicely. 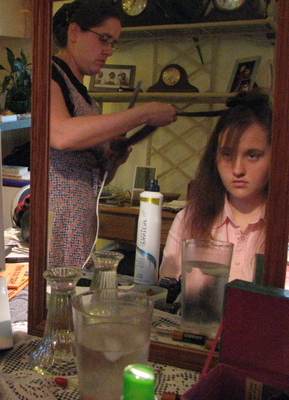 (Although at this point, they both may have been wondering!)
Rachel has beautiful, long, long hair.  They decided to pin it up and then did the fall in curls.

It’s hard to worry too much when you are so looking forward to an evening. 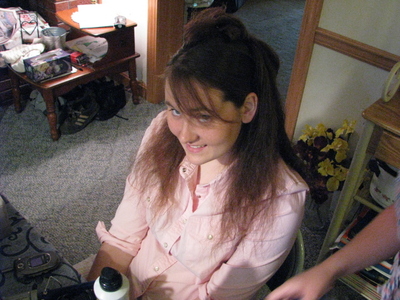 By this time, she seemed pretty sure it would turn out okay. 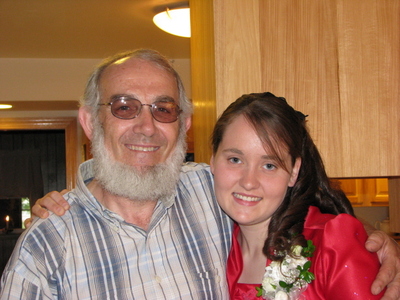 Here she is with her daddy, just before leaving for the Banquet.
He is so proud of his girlie.
From the time when she was a toddler, and he would crawl around on the floor,
hiding behind the cupboards to leap out at her,
they have been best buds.
If I didn’t know that it is so good for a teenager to be good friends with her dad,
I would be jealous!
(As it is, I am so very grateful.)

Shortly after this, he came to the school too,
and lent a much appreciated hand to the labor intensive evening.

Oh, boy!  Am I glad that is done!!!  I feel like my legs are made of stumps.
But then, we were the oldest parents there. Even though many of the junior class seem to be “youngest children”  Certain Man and I were the oldest working in the kitchen tonight by at least two years.
I think that made me feel even more tired than I was before I realized it.
So it is off to the land of slumber for me.
I am very, very, very, very tired.

Youngest Son had a birthday this week.  He turned 22 on Cinco de Mayo.  What a ride these years with him have been.  And I am eternally grateful for God’s incredible grace in our lives as a family, and in his life in particular.

This Momma’s heart has had its pensive moments in these last few days — we’ve been dealing with an especially vicious bug.  Youngest Daughter has been sporting a fever of over 103 the last two mornings.  I took her to Dr. Lehman’s office yesterday, and they tested for strep and said she didn’t have it.  They started her on a five day antibiotic.  “Somethings wrong,” they said, comfortingly.  “She will be better soon.  Probably won’t even have fever by morning.”  She really isn’t too much improved yet today, but it has only been 24 hours since she started the medicine.  She had hoped for a full recovery by this morning and when the thermometer read 103.2, the tears were insistent in their attack.  This girlie feels everything entirely too intensely.  I guess it is part of being 17.

Blind Linda’s cough was turning into a bark by yesterday morning, so I trucked her in to Dr. Wilson’s yesterday afternoon, and after checking her over, and diagnosing her with acute sinusitis, he trucked his little wheeley chair over and listened to my lungs and checked out my ears and throat and nose.  The result:  A prescription for both Certain Man and me to try to stamp out this thing that has been hanging around over a week.  The cough is the worst of all.  I get a tickle that just won’t stop, and it feels like I’m going to throw up before I finally get it stopped.

It occurs to me that we are on our final approach to life as we have known it for the nine years since Eldest Daughter got married.  I am happy for our sons, and I am looking forward to having two sweet daughters in love.  I am amazed, though, at how quickly these years have suddenly come to an end.  I am not resentful of the new homes being established, and I have every confidence that these are homes where Jesus will be honored, and that is a good thing in this old sin-crazed world.

But it is both of my sons.  Leaving in the space of eight weeks.  They are so optimistic, so happy, so eager to get on with their lives, and I look at their eyes and see their Daddy’s eyes and remember a young husband who was full of dreams and plans and who worked so hard to bring those dreams to pass.  He has exceeded my wildest expectations.  I’m so thankful for Certain Man and the way he has sacrificed for our lives together as a family.  I pray these sons of ours have learned their lessons well.  They won’t go wrong if they follow his example.  How very much I pray that they will be husbands who lead their families with a sacrificial love.  I pray that they will be the kinds of leaders who will inspire confidence and respect in their wives and families, and that they will never forget the important things about being a family.  That they will work hard, laugh much, love intensely.

And it occurs to me that if they don’t know it by now, a crash course won’t do much good.  Some things just aren’t gotten by emergency education.  So, as I make my way through these last few weeks, planting flowers, making pie crusts, doing normal household things, I keep remembering that my best hope is what has already been taught, and my lifeline to my Heavenly Father who holds the Master Plan for families, and, in fact, already has one in place for them.  I can trust Him for that — He is still the best teacher.  And I need to let go of these young men.  They will make mistakes.  They already have, and they will make some more.  But their hearts are to do this right, and with that, my heart can be at peace.