I sat in a doctor’s office today, and she asked about the surgery that was done on my knee.  “When did you  have it done?” was her first question.  I thought back.  It seemed at least a year ago.  H-m-m-m-m-m.

“It was done in February, I guess,” I said reflectively.  And I got to thinking about everything that has happened since that day in February when my orthopedic surgeon stood by my bed and said, “Things are not quite the way we expected. . . ”  If I had known that day just what lay ahead of me, I suppose that my heart would have quaked within me!

Here we are, four and a half months later.  If only the months had just been about knees.  But it hasn’t been.  In fact, so much of these months hasn’t been about me at all.  There’s been so many times when I thought the end of the stories would be something I didn’t want to read.  There have been times when hope was the white painted face of a silly mime dancing on an empty stage in the theater of grief.   I am in awe of the grace of a God big enough to handle my days of tears, of sorrow, of doubt and pain, of anxiety and seeming loss.  He has tenderly  carried me when the way was too rough for me,  He has given songs in the night, friends to hold me steady and given hope the living face of my suffering Savior.  He suffered so much —  for us!

Tomorrow, Certain Man and I will celebrate another anniversary.  36 years ago tonight, we were trying to rehearse for a wedding.  No wedding coordinator.  No rehearsal dinner.  No florist’s flowers.  No tuxedos.  No rings.  No flowing veils,  No sweeping gowns.  No violins, organs or Canons in D. Just two people who decided to risk loving each other until death parted them.  (And a bunch of people who decided to cheer us on!)  We had no idea how incredibly painful the relationship would be sometimes.  We had no inkling of how palatable, either.

There was a wedding in our community on Saturday.  Certain Man and I came home from the wedding to view the funeral for Dawn on the webcam.  I sat here in my chair, and he sat on the hearth beside me, and we wept and listened and thought again of how fragile this whole thing of life is.  From celebration to sorrow.  From joining to parting.  From laughter to tears.  And that is how life is, after all.  This grand mixture that only tastes right when the “God Flavor” is in the right balance.  It’s what makes the hard things easier, and keeps us watchful in the good.  It is what gives meaning to months like these last four and a half and causes us to look forward with hope.

One of the girlies from church took this picture at the wedding, and it is just fine for an anniversary picture. 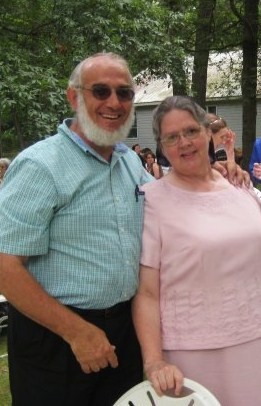 Happy Anniversary, my darling.
Just so you know, I would still choose you!!!