Saturday, February 13th, the rare opportunity presented itself of having most of our children home for breakfast.
Middle Daughter was still in Chad, but the rest of the crew was here.

Including our grandbaby, Charis.
Isn’t she growing up? 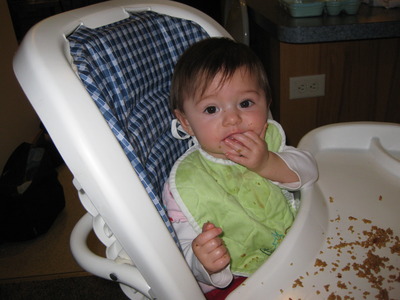 The Yoders were getting together for breakfast at Smiths, and I am often not able to be there, but Daniel had said I should plan to go.  After I had my plans laid, I discovered that the kids wanted to have breakfast here.  “You don’t have to be here, Mom,” they insisted.  “We can get along without you.”  I was so torn, because I did, of course, want to be here with my family.  But I really wanted to go to be with my extended family, too.  Especially since my “almost a twin” cousin, Gloria Diener and her husband, Gene, were coming from Virginia, bringing my Uncle Paul along.  So I made baked oatmeal for my family, and got things around here, and when I left, this is what I left behind: 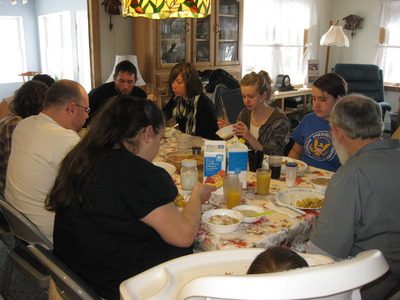 At the far end of the table is Oldest Son, Raph with his wife, Regina (clockwise, here).
Beside Regina is Rachel’s friend, Bethany Barkdoll and then Rachel. 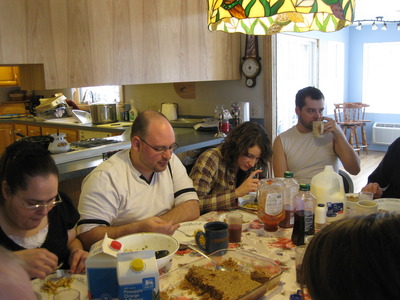 At this side of the table is Christina, Jesse, Jessica and Lem. 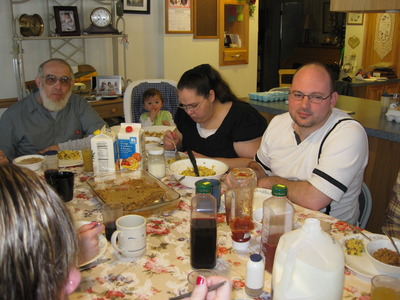 At the other end of the table was
Certain Man,
Our little Love Bug,
and Christina and Jesse again.

It was really hard to leave.  But I had such good company waiting: 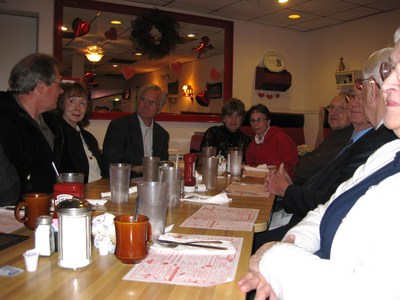 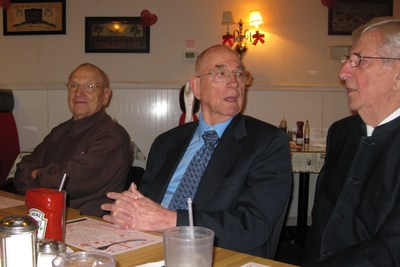 Here is a better pictures of the three uncles.
Uncle Daniel, Uncle Paul, Uncle Jesse.
Uncle Amos and Uncle David weren’t there.
Uncle John, Uncle Luke and My Daddy may have been watching from Heaven. 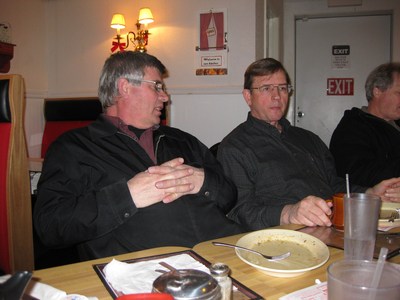 My brother, Mark, jr., and cousin, Joe Bontrager.
These two had plenty to discuss.  It seems like Mark had broken his toe and didn’t think he was getting the sympathy he deserved.  (Maybe he should have a Xanga page, and he could have written a story!) 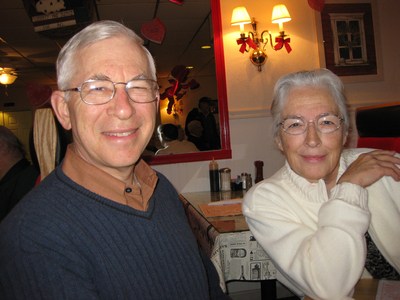 Dave and Ilva.
There were sitting up by me.
They are always good company. 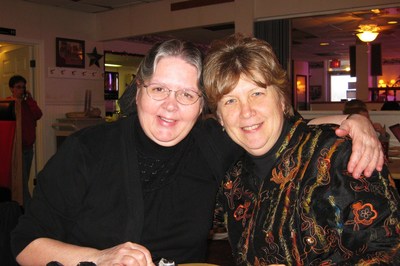 Just before we broke up, Gloria asked if we could sing the song, “I owe the Lord a Morning Song.” and of course, being Yoder’s, we did.  it bounced off the walls of the restaurant, and sounded so good.  I listened to my Uncle Jesse’s tenor, and heard the strong altos, tenors and basses.  Becky, down at the other end, was singing her heart out, too.  It settled into my heart and comforted me.  And then Gloria and I got a picture, like we try to do when we are together, but goodness, me, Gloria-girl! Is that really us???  How did we get to be so —???  (I won’t write it, then it might not be quite so true.)

All too soon, it was over, and some of the family was hurrying to Vivian Beachy’s funeral, and the rest of us went our separate ways.  Good memories of good times together — until we meet again.

And this afternoon, Certain Man and I are heading for Baltimore to pick up Middle Daughter.  Yes, she is to be arriving HOME today.  I am so excited.  It will be wonderful to have her home again.