Beebs and Rach head out again. . . 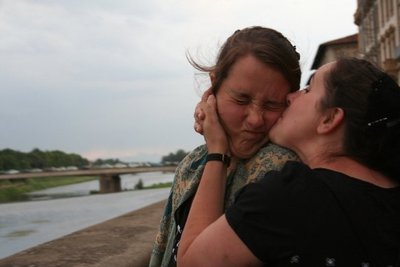 Our World Travelers are on their way again.  Beloved Son in Law took them to the airport this morning.

They are on their way to Guatemala to see Lupe.  The trip has been planned for a long time, and it looked like it should have gone without too much trouble.

There’s been a volcanic eruption in Guatemala, closing the airport.  They tried to reroute to another airport, but to do that would change their airline, consequently, their tickets, consequently costing right at $1,000.00 more.  Rachel, seriously, could not afford her part of that.

So, their airline offered to reroute them through El Salvador, where they could catch a bus for a six hour trip to Guatemala City, where Lupe and her husband would meet them and take them the six hours to their home in Quetzaltenango.

There is a tropical storm blasting Guatemala and El Salvador and some neighboring countries.  At last count, there are 150 dead, and there are mud slides, roads out, and even a huge sink hole in Guatemala City into which a building completely disappeared.  Then there is the volcano and the ash that is causing things to be difficult.

And they told me not to worry!!!  “I wonder,” mused Youngest Daughter, “if I was born without a fear factor.  I mean, I figure that I belong to God, and Jesus will be with us, and as long as we don’t do anything stupid, He will protect us.”  Okay.  What’s the definition of “stupid”?

Rachel was actually ecstatic.  She wanted to have visited 25 countries before she was twenty, and Guatemala was only 24.  El Salvador makes 25. “Yippee!!!” she squealed, while she bounced in her chair yesterday.  “This is so incredible!!!  An adventure!!!  This is how I like things to be.”

And then, just now, they called me and told me they realized they were headed for the wrong airport.  Deborah thought they were going to Dulles.  Seems like they were supposed to go to Ronald Reagan.

“Gotta’ get off, Mom,” says rather flustered Middle Daughter.  “I need to call the airport.  We still have time to make it.  At least we should . . . ‘Bye.”  And she hung up.  Whew!  How in the world am I supposed to react to all this?  I prayed that if they weren’t to go, that God would stop it somehow, but I don’t want it to be because Deborah read the tickets wrong.

It’s a good time to pray.  I think I better “get off” here, too. I’m going to go get Youngest Sister and we are going to go buy some flowers.  A diversion.

Stay tuned for the rest of the story.  And please pray for Deborah and Rachel.

UPDATE:  The girls eventually got on their plane.  It seems that Jesse dropped them off, helped to get things unloaded and left.  And then, after Deborah was through Security, she discovered that her camera was missing.  She knew she had it in the van, so she called Jesse, and sure enough, there it was.  It had fallen out of one of the bags.  Jesse turned around, went back to the airport where she waited just beside the door to claim what was hers.  And then, once again, through security, and finally we got a text message that said they were on the plane, and this Mama could breathe a little bit easier.

This evening, I had a phone call from a very distraught Lupe.  She is quite worried, indeed.  El Salvador is a much worse place than Guatemala, she said.  Her husband told her that people rob people there, and just take advantage of people.  He is very worried about their safety.  And now the bridge is out between El Salvador and Guatemala, and they aren’t sure how the girls will ever get across.  And people keep stopping at the house to see if they have come yet, and then in true comforting fashion say things like, “Your American friends must love you very, very much to risk so much to get here!”

“Miss Mary Ann, I’m just so worried,” says my little Latin Lupe-Lou.  “If anything bad happens to my friends, I just want to die with them!’

“Lupe,” I say in the most reassuring voice that I can muster, “this is a good time to pray.  Worrying won’t help a single bit, and God knows where the girlies are. He is able to keep them in His care.  We need to trust Him, pray for their safety and wait!  Deborah and Rachel have been through lots of tight scrapes in their lives, and Deborah has a good head on her shoulders.  God is with them.”

She settled down then, and we had a great conversation.  And just at the end of the calling card, lightening struck somewhere close, shutting down the electric in Milford, and that was the end of the connection.

Just about an hour ago, the girls landed in Houston.  Late, but in time to catch their flight to El Salvador.  We were able to talk to them and tell them about what we had heard through Lupe.  And they listened!  In fact, they procured tickets that will bring them back to Texas tomorrow in the event that they can’t get a bus ride to Guatemala from El Salvador.  They are on the plane, ready to take off for El Salvador, and they are very aware that things might turn out differently than they had hoped.  But they have found some fellow travelers that are in the same boat — headed for Guatemala through El Salvador, and that is comforting (to them and to me).  There are more bridges between Guatemala and El Salvador, and there has to be some recourse for people in this situation.

I refuse to give in to panic.  I know things aren’t very quiet in El Salvador, and I would appreciate your prayers for the safety of our girls.  I know the Lord is with them, and I know He can protect them.  Worrying won’t help.  Praying does.

Much later update:  (Actually, at about 1AM on Wednesday)

Deborah Yutzy is safely in San Salvador, in a nice hotel, with all of our luggage, (PTL) and there is a bus leaving tomorrow morning for Guatemala with seats available. (D.V.)

AN HOUR LATER, THIS ONE SHOWED UP!

Rachel Yutzy Currently in El Salvador with mi hermana and trusty travel companion, Deborah Yutzy I think I may have exited another “teenage” phase. I truly realized that I am not immortal. But hey, I am still super excited about our “ADVENTURE!”

PRAISE THE LORD, DEAR FRIENDS!!!  DEBORAH AND RACHEL SAID TO TELL EVERYONE THANKS AGAIN FOR ALL THE PRAYERS.  PLEASE DON’T STOP NOW.