An Old Story, A New Chapter

Back when Oldest Son was in Nepal, I wrote the following after talking to him one evening.

We talked to him tonight.
Half a world away.
I’d guess you’d say
“A world away.”
If he were any further,
He’d be getting closer,
Around the rim of the world.

I hear it in his voice.
I know he thinks that I don’t
But I do.  He hangs on at the end
Like the child that doesn’t
want to hang up.
I get off the phone and cry.
My Son, My Son.

They say he will be home
Before we know it.
It’s already too late for that.
They say he is safe.
And I know that when he’s
In the Father’s hands
He may not be kept from harm
But he is safe.

What is in your heart tonight, Son?
Are you simply enduring to the end?
(There’s virtue in that, if it’s the best you can do).
Is there hope?  Plans for the future?  Praise?
Do you have purpose for your days?
Do you sleep carefree at nights?
Do you see this as something more
Than something to “get through?”

Do not let the moment slip you by.
Do not waste these days of adventure and opportunity.
Do not forget why you are on this earth
Do not miss the reason for your absence from home.
Do not neglect the gifts you’ve been given to expand The Kingdom.
Do not back off from service.

And though I cry — and miss you so much,
I am so proud of you.  I pray for you.
I remember the bright-eyed baby
That I held on my shoulder and believed
That you were spared for a purpose.
And that God would do great things through you.
And most of all,  I will always love you.

Last night, we skyped with Rachel.  We have such an incredible provision to see her face and listen to the inflection in her voice and actually be able to know what she is looking like when she talks to us.  It is such a blessing to this Momma’s heart.  But it makes the spaces of our home so empty when we close the connection.

And that’s another thing.  When we close the connection.  Like her brother before her, Rachel hates to be the one to say “good-bye.”  We say our “I love you’s” and “We’re praying for you’s” and “We’re so proud of you’s” and “We miss you’s” at least once and then we say them again.

And then she says her famous, “I will NOT break this connection.  I CAN’T!!!  You are gonna’ have to do it.  I just cannot make myself do it!”

This Momma has learned the hard way that when something needs to be done, and no one else will do it, sometimes you need to steel yourself, harden your heart and do it.

Like those many years ago when there were chickens to butcher and no one would do the Dastardly Deed of cutting their throats.  I remember a line of chickens, hung up by their feet, waiting for The Knife.  Certain Man claimed ignorance.  He also claimed that it was too hard on his heart.  (I know him well enough to know it was . . .)  But someone had to do, and so I made sure the butcher knife was sharp enough to shave hair off an arm, and I did what I saw my Daddy do so often — except that I closed my eyes while I did it.  And I got it done, even while a little part inside of me died, and that part that died, turned to stone.

Last night, I looked at that “end call” button and knew that someone had to do it.  I reached out my finger when it could no longer be delayed by one more “I love you” and pushed it hard.

It felt like I was putting a razor sharp knife against her vibrant life.  One instant, her image was there, the next, the image was gone.

I shut the computer and turned away.

Whatever was in my heart hadn’t died, hadn’t turned to stone.

It hurt too much for too long.

And that was (almost) comforting. 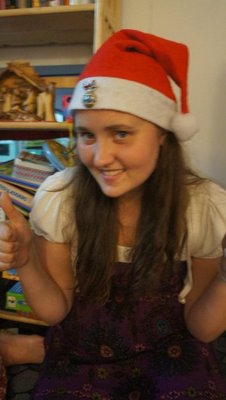 4 responses to “An Old Story, A New Chapter”