Take one whole chicken. (Usually sold as a whole fryer) Put into a large pot — (I like to use at least an eight quart size) cover with water, add 1 tablespoon salt, 1/2 medium onion, and two or three ribs of celery. Cover and bring to a boil. I usually let it cook on medium for an hour and half to two hours.

Take the cooked chicken and vegetables out of the pot. (I put it into a 9X13 Cake pan and let it cool until you can handle it enough to take it off the bones.) Discard the cooked onion and celery, skin and bones.

While the meat is cooling, I like to strain the broth if there are lots of “floaties” in it and skim off excess fat. Put the broth back into the pot, and add about a four cups of corn (I use the home frozen variety) two or three cups of lima beans (If you don’t have home grown ones, be sure to buy frozen Fordhook limas in the supermarket) a cup of chopped celery, 1/2 cup chopped onion and one carrot shredded and two or three packages of chicken flavored Ramen noodles with the seasoning packets. I would probably use three, and I usually take my meat mallet and break them up in the package just a little before I put them into the broth. Bring everything to a boil and let simmer for about 10 minutes. Add the meat that has been taken off the bones and stir into the soup. (You can cut the meat into whatever size you want it.)

And it is ready to eat. 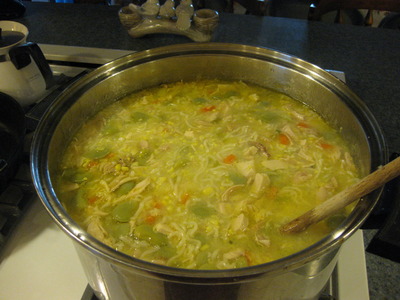