Here we are in all our splendor!

I’m sitting in San Diego, waiting for my sister in law to get home from work.  Certain Man and I awoke in the very early morning, and were so encouraged to have Beloved Son in Law drive us to the airport.

We landed at O’hare in Chicago: 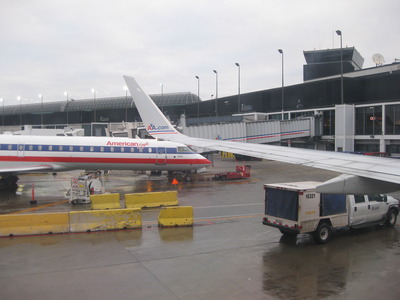 and it was rainy and chilly.  I took this picture through the window of the plane, and tried to upload this one and some others.  This is the only one that came through.  Daniel and I didn’t even get off the plane.

Then we came on to San Diego where it is warm and beautiful and the flowers are blooming  and I took a whole bunch of pictures — but there isn’t any way for me to get them from my computer to this computer, so I will wait for the wifi at some other place and then I will put them on.

Oh, yes, there is one thing I didn’t take a picture of, and I am so glad of it!

We got the plane in Washington and stayed on it until we arrived in California.  The last flight was to last about four hours and I think perhaps 90% of the passengers used the bathroom during that flight.  The bathrooms were extremely small, as plane bathrooms are wont to be, and there was no time for adjusting clothing, combing back hair, etc.  You pretty much got in and got out and hoped that the line wasn’t too impatient whilst you were in there.

I’ve mentioned before Certain Man’s penchant for being the last to leave somewhere.  This was true again today when we were disembarking from our plane.  He had gone to use the restroom after we had landed, because he always plans to be the last to leave anyhow.  I scrunched around on the seat, gathering my computer bag, folding our lightweight blanket, collecting our neck pillows, making sure I had my phone, my camera and everything safely stashed in the purse.  When he came out and everyone else had gone, the stewardesses were waiting for us to finally get ourselves on out of there.  They were gracious, of course, and bid us a fond farewell, and we thanked them, and stepped off the plane — and suddenly there was this dreadful feeling of something tripping me up, and sure enough, with all that scootching around on the seat, my slip had worked itself down and was in the process of trying to fall off.  (I know, Mama, I know.  Always wear a full slip when traveling so these things don’t happen!)  Six inches of white were making themselves known.  I didn’t look back to see who of the crew may have been watching, but it was surely one time when I was glad that my husband likes to lag behind.  There were NO PASSENGERS in the long hall ahead of us, so I discreetly (I hope!) grabbed at that slip through my skirt and pulled it back up.  I held on to it until I found a Ladies’ restroom, and then I safety-pinned it securely so it wouldn’t slide down again.

Whew!  It is my hope that I have my embarrassing moment over for the rest of this week, and won’t have to worry about what might happen.  But, unfortudiously, I know myself pretty well, and I suspect that there is another moment waiting for me around the corner.  Oh, Dear.  If I wasn’t afraid I would miss something, I’d be more careful.

But I don’t want to miss anything.  Look out, San Diego.  Here I come!

9 responses to “Here we are in all our splendor!”