I am taking a brief break from my San Diego story to tell a Valentines’ Day story.

Daniel and I had our first date on Valentines’ Day, 1971.

Yesterday, walking through the airports, first in San Diego, then in Dallas, Fort Worth, and finally Washington, D.C., I commented to him about how, if you had told me that long ago day that in forty-one years, we would be coming home from a trip of a lifetime, tromping in such unbelievable places (to me, then, anyhow) I would never have believed it.

Daniel has always been pretty compulsive about flowers for Valentines’ day.  He has almost always gotten me pink and red carnations with a generous amount of baby’s breath thrown in, all done up in a vase.  When we were very young, he could afford maybe three or four, or possibly a half dozen, but he always did it, and, to be honest, I think that I took it for granted.  I liked it, don’t get me wrong, but I just didn’t realize how much it meant to me.

Over the years, Daniel has taken to getting his daughters flowers on Valentines’ day, too.  Especially if they didn’t have a boyfriend or husband to do it for them.  Last year, when Rachel was in Thailand, he went to great lengths to be sure that she got flowers on Valentines’ day.  And it was gratifying to him to see how much it meant to her.  This year, well, we were in San Diego, and there were many things that took his attention.  To be honest, I didn’t even think about the fact that his girlies were probably expecting flowers from their Daddy.

Last night, we got to talking about it and he said, “I planned to try to get some delivered from San Diego, but I needed Rachel’s address, and things were just so busy, I decided that I would just do it when we got home.  The flowers will be a day late, but I will still do it.”

When we walked into the house last night, there was a beautiful bouquet of flowers on the dining room table.  Deborah had bought them from Wal-mart for $10.00 for some sort of shin-dig she had hosted for some of her friends.  They were beautiful, attractively arranged, and I thought they were quite nice indeed.  I thought that it was nice that there were flowers for Valentines’ Day, no matter how they got here.

When Daniel started talking to me, though, about how he was getting flowers sent to both Rachel and Deborah, I felt a bit wistful.  He needed to do quite a bit of work to get everything arranged, and he consulted with me at various times of the day working out the details.  For some reason, I was overcome with a desire for him to get me some flowers, too.  I kept giving myself very stern “talkings to” about this irrational thinking.

“You just got home from an expensive and very romantic trip,” I told myself.  “And there are nice flowers here.  You’ve had your husband pretty much to yourself for a week, you don’t need flowers to prove ANYTHNG.”

But it didn’t help much.  I wanted them so badly that I almost said something to him about hoping that just maybe I could get a little tiny token bouquet.  I thought about how I could word it so that he wouldn’t know that he was being prodded to do it, but I knew I wouldn’t really want them if I had to ask for them.  So, I kept my mouth shut and went about this day with grim determination to not pity myself and to be cheerful.

And what a day it was!  First thing this morning, Nettie took a tumble backwards in her room and thumped her head on the floor with a sickening ‘Ka-thump!”  I raced into her room and found her unresponsive on the floor.  She started coming around in maybe 15 seconds or so, but she really scared me.  She eventually got herself up, and she seemed pretty normal.  I needed to take her for blood work, and Cecilia to a doctor’s appointment, and that pretty much took all morning.  I did call her primary care physician to ask for advice and duly reported it to the state, and before everything was said and done, they insisted that I take her for a CT scan.  They got especially strident after Deborah evaluated her and felt that her responses were more depressed than usual, and that there was some “spacing out” going on.

I spent hours in the emergency room.  They were busy, every bed was full, and they were putting people on stretchers in the alleyways and in front of the nurses’ station — which is where Nettie and I ended up.  They sent her fairly swiftly for the CT scan, but then the hospital ER computers went down, and they waited and waited for them to come up.  Just when I thought I couldn’t bear it any more, they came and said that the scan was clear, that Nettie only had a concussion, and that they were going to write the discharge papers in long hand so that she could be discharged.  Which they did eventually, and finally we were able to come on home.

I stopped at Eldest Daughter’s house to pick up Cecilia, where I had deposited her when I went in to the emergency room.  Then I went and filled my van with some much-needed gas.  Then I went through the pharmacy drive through to pick up some prescriptions, picked up some donuts for Nettie and to serve at the Small Group meeting that was scheduled for the evening, and then, finally I was on my way home.  I was almost in tears from the frustration of the day, and the thing least on my mind was flowers — mine, daughters, or otherwise.  I just wanted to get home to my chair, get a good hot cup of coffee, take something for the aching in my head and my bones and just sit a little bit before getting supper and getting ready for small group.

Nettie carried the donuts, I got Cecilia and a few of the sundry and various things that needed taking in.  Certain Man was already home, and I came into our warm kitchen to see the bouquet of flowers that had been on the table, sitting on the bar.

And then I saw these, sitting in the middle of the dining room table: 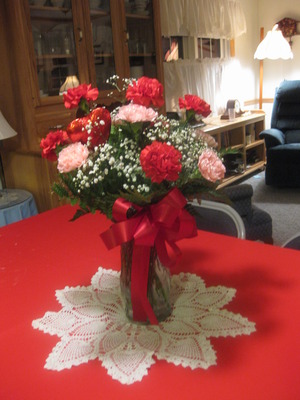 Once again, I was fighting the tears, but not from frustration or feeling sorry for myself.  The flowers were so beautiful — and there was something in this bouquet that I have never had before.  See that foil wrapped heart there just above the pink carnation on the bottom left?  That is a chocolate candy heart.  The florist said that she had several left over from Valentines’ day and threw it in at no extra charge.  This was one happy gal!  Not because I needed them.  I really for sure DIDN’T.

But because it spoke to me of, not only my husband’s love, but of the way he makes it his business to really understand what matters to me and goes above and beyond “just getting by” to the place of delight.        .

I surely do love you and I appreciate the flowers.

Happy Valentines’ Day to all of my Xanga friends.