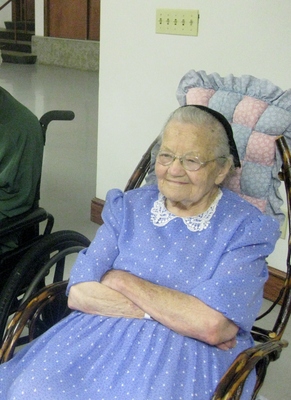 Sue was born on April 11, 1923 to the late Joe and Alma (Miller) Beachy at Plain City, Ohio. She was born and raised Amish, one of a family into which 15 children born, 12 of whom were raised to adulthood, six boys and six girls.  The siblings and their families enjoyed many happy times of fellowship over the years, sharing special meals, game nights and family reunions.  She worked for the I.G.A. Market in Plain City until 1960, when she married widower Ralph E. Yutzy and became an instant mother to his five children.

She joined the United Bethel Mennonite Church as an adult, and was a faithful member until her death.  She and her husband were often involved in the work of the church in practical ways, meeting the physical needs of the body of believers, visiting the sick and elderly, and inviting those who had no family into their home for food and friendship.

Sue worked hard for as long as she was able, helping Ralph in the various endeavors they took on, gardening, (and preserving the fruits of her labor) cooking and housekeeping.  Sue loved a clean house.

She was predeceased by an infant son in 1962, son, Joseph, in 1981, her husband, Ralph, in 2010, just months after celebrating their 50th wedding anniversary.  She was also predeceased by her parents, brothers; Eli W., Noah, and Lawrence Beachy, sisters; Emma Detweiler, Alma Gingerich, and Laura Beachy, Malinda and Alice Beachy who died as young children and a stillborn youngest sister.

She is also survived by brothers, Homer Beachy, Joseph (Ada) Beachy, and Walter, (Mary Jane) Beachy, and sisters Lavina Hostetler and Inez Miller, and a host of nephews and nieces.

“She fought a good fight, she finished the course, she kept the faith.”

Calling hours will be at United Bethel Mennonite Church from 2-4 and 6-8 on Sunday, February 24, 2013, and the funeral will be Monday, February 25, 2013 at 10am, also at the church, with burial in the adjoining cemetery.

The family wishes to recognize and thank the many friends who have visited faithfully and provided assistance to Mom so frequently over these last years.  Special thanks to Jonas and Arlou Beachy, and Jami for their unwavering loyalty, love and support. Your kindness to Mom is a gift of great value and we all thank you.