It was 7:30. I was standing at the kitchen sink, loading breakfast dishes into the dishwasher, and waiting for Cecilia’s bus.  Our birdfeeders have been busy with the kind of weather we’ve been having, and I heard a thump and then a little shrieking sound.  It puzzled me, and I looked out to see if there was something amiss.  It sounded like a bird had hit the window.  There was nothing.

Just as I was turning back to my job, an object hurtled past the window.  A mama cardinal smacked the sliding glass door with a thump and tumbled onto the deck, lying there stunned.  Just as quickly, a Cooper’s Hawk dove in, landed squarely on the stunned Cardinal and swooped off again, its hapless victim firmly in its talons.  It landed about twenty feet out in the yard, and sat there.

I was furious.  The area that the hawk dared to come into has only one open side.  I sometimes see them in the tree out in the lawn, but this is a protected cove and it really made me cross.  And of course, Cooper’s Hawks are protected.  You may not kill them.  But you can encourage them to leave.  So I headed for the trusty BB gun.  Maybe three pumps on a copper BB in a ten pump gun would do the trick.

As I rounded the corner to get the pellet gun, I caught sight of a DART van pulling into the driveway. Cecilia’s bus.  Of course.  So I detoured back, got her shoes on her, and put on her coat, grabbed her lunchbox and headed for the other side of the house.  As I went by the door leading to the side yard, I craned my neck and saw that the Hawk was still on the lawn at the same place.  I hurried Cecilia to the van, was barely civil to her driver, and flew back into the house.  Still there!

I grabbed the ancient pellet gun (Think “Youngest Son, age 12 or so”) and slid a pellet from the holding place into the chamber, gave three quick pumps that felt absolutely futile, and opened the door.  The hawk, watchful and wary, lifted off with its prey and I aimed in the general direction (using the term “aim” loosely, here) and pulled the trigger.  “Phoot” went the old pellet gun with a most useless sound, and the Hawk rose, sure and majestic and disappeared into the piney woods that borders Shady Acres.

I felt almost nauseous as I watched it go.  I came to my computer and googled Cooper’s Hawk.  What I read comforted me somewhat.  This from an article about protecting backyard feeders from hawks:

It is important to remember that even though it may be disheartening to see a songbird fall victim to a hawk, the hawks are only playing their role in nature’s cycle and they do not kill more birds than needed to survive. In fact, studies estimate that only 10 percent of a hawk’s kills are successful, and of those, the majority of the birds the hawk takes are old, weak or sick and removing them from the flock will help strengthen the remaining birds.

And even though I am quite sure that the Mama Cardinal wasn’t sick, I’m sure that she was confused.  Especially after I read this:

Protect Windows: Use decals and other methods to prevent window collisions by panicked birds. When a hawk attacks, small birds will mistakenly fly into windows and a stunned bird is easy prey.

We have decals and latticed windows, but we still have occasional incidents of birds flying into the windows.  So, it is one of those things that, even while I really hate it, I cannot escape the natural balance that God put into our world, and even the compelling engineering of this bird of prey.  He certainly is handsomer than a buzzard. 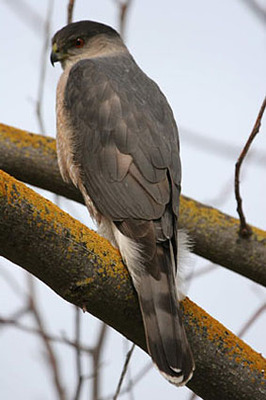