Certain Man had his left knee replaced today.  (Actually, yesterday, when I look at the time!)  I’ve watched the ongoing pain and the way he has tried to cover everything up for the last few years and my heart ached for him.  We’ve waited for this day as a family for a long time.  It took a long time before he was ready.  When he was finally ready, the doctor had a long waiting list.  When the day was finally scheduled, it seemed like such a long way off.  And then, all of a sudden, there was a cancellation.  Not much of one, but enough of one that it suited our family schedule exactly.  And finally, this day came.

6:45.  How in the world did it happen to be so early?  I’ve had three major surgeries over the last three and a half years at Beebe Medical center.  My two knee replacements were both later in the morning, and by then the schedule was off and I had a rather long wait.  Last spring, when I had some repair work done, I waited over two hours past the scheduled time.

And when someone you love is having surgery, you wait a lot more than they do.

But the waiting today was well worth it.  Dr. Choy came back from Daniel’s knee replacement and almost danced in the waiting room.  Grinning from ear to ear, he said, “Everything went just perfect.  It was just beautiful.  He is going to be so happy with his new knee.  His bones are so good, and I was very confident that the pivotal joint would work just fine.  His ligaments and tissues are healthy, and I am so happy with how things went.  Just perfect!”  He laughed and then thanked me for the card that our granddaughter had written last evening. 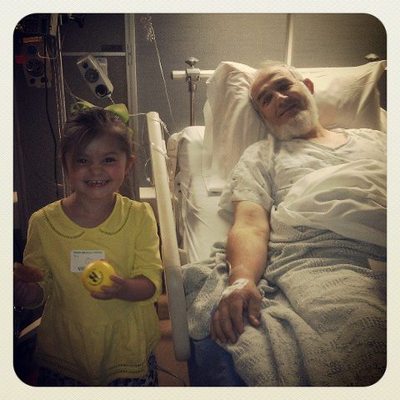 Daniel had some trouble in recovery, when his heart rate went down to 30 something and his respiration rate was only 5.  Then when he got back to his room, his blood pressure shot up to 193/103, and his heart rate kept falling below 45, causing some grave consternation on the part of his nurse.  But when they gave him pain meds, his blood pressure stabilized and then his pulse got a little better.  His heart rate is often in the high 50’s or lower 60’s so that comforted them a bit.  Daniel is one of the strongest men I know, and he is pretty healthy except for this knee problem  The nurses tonight kept going over his medical history and exclaiming over his abilities.  Because his blood pressure was so high, they were sure he was having extreme pain, but they kept saying that he didn’t act like he was in pain.  He said that the pain was more of a dull ache, and his hip was hurting him from being on his back.  They got him up and had him sitting on the side of the bed this afternoon.  If he continues to progress the way he has so far, they are saying he may even be able to come home early.

Someone said to me last week, “Are you kinda’ dreading having your husband home all the time for the next month while he recuperates?”

The thing is, this man really is one in a million when it comes to things like this.  Several years ago, he needed rotator cuff surgery, and he had heard so many terrible things about it — how painful it was, how limiting it was, how long the rehab, and many dismal predictions.  When I talked to Dr. Rowe after surgery, I was afraid it was going to be one of those same stories for Daniel because Dr. Rowe was very uncertain about how successful the surgery would be.  The tear was right up by the shoulder, and there was almost nothing to attach to.  Dr. Rowe used a cow dermis to patch things up, and he wasn’t at all confident that there would be a positive outcome.  Daniel came home from that surgery and the pain was so intense he sometimes fought back tears.  But he hung that arm down from his shoulder and started to do small circular motions the day he was told he was allowed to.  And he worked like crazy to return to normal.  Walked that arm up and down the wall by climbing his fingers one over the other slowly inching his way up and then back down.  He seemed to make up his mind that his job for that particular time was to get better, and he undertook it the same way he goes after making fence or shoveling dirt or planting his garden.  I will never forget that when he went back, his range of motion was astounding.  He was easily able to wash his own hair and do things that other patients took months longer to work their way up to.

And because he was so focused on getting better, regaining range of motion and keeping his strength as well as mobility, I can honestly say that he was not difficult to have at home.  I hated to see him go back to work.  Another plus was that his example before me of staying positive in the pain, pushing through when therapy was tough and doing all that you could possibly do was an incredible motivator for me when I had my knees replaced.  And I think it will hold him steady through this.  The nurse told him today that Rotator Cuff Surgery is more painful to have done, and harder to rehabilitate from than knee replacement by a long shot.  I don’t know if I want to believe that, but it certainly pleased Certain Man!  I know that he doesn’t expect a gravy train recovery, but he is feeling optimistic, buoyed on by almost everyone who comes in contact with him exclaiming that he is doing exceptionally well, splendidly, wonderfully, etc.

I am so grateful in this whole thing, because this is all an answer to some pretty specific prayers over these last weeks. When worry wanted to rear its ugly head, I tried to pray that God’s will would be done — in every aspect of things.  Timing. The surgeon’s hands.  Recovery room issues and the experience he would have on the floor itself. Daniel and I , together or separately, could never have orchestrated some of the things that came together today.  And along the way, there were many things that could have stopped this from going forward.  But they didn’t.  And I sense the Hand of the Father all over this.

And I give grateful praise.