I saw the neurologist yesterday.  It was to scope out the results of that fateful MRI of last week.

“All normal!” He announced in his heavy accent.  He tries very hard to be specific and it isn’t too hard to understand him.  (I just can’t understand, though, why the “BEST” Neurologists are these dark, scholarly looking Jordanians or even “Persian” — that really got me, when a new doctor in one of the towns I lived was introduced as “Persian.”  The early 1980’s were not a time to be from Iran.  And so, he conveniently came from Persia, established his practice, and eventually dropped out of sight.  I wonder what happened to him . . .)

“H-m-m-m-m-m-m-m-m-m . . . ”  He looked thoughtful, relooked, flashing through the thousand images in a split second.  I looked at the record that was my brain and wondered what in the world he could see.  It all looked sinister and creepy to me.  Some of the images showed my skull.  That was really freaky, looking at how my skull would look without my skin on.  Yikes!  But it is comforting to know that under the skin, there is commonality.  I mean, the man had someone else’s MRI up there and didn’t even know until he read the report and realized that what he was seeing wasn’t what was in the report.

“You have a cyst,” he said, “right in the middle of your brain.  It is common for people to have this.  You’ve probably had it since you were born.  It is of no consequence.  It wouldn’t be making your facial problems.”  He kept looking and looking and suddenly said to the nurse, “Is Dr. Davé here?  Did he read this MRI? I am going to go get him.”  And he disappeared for a few minutes, then returned with the other neurologist.

They brought up the MRI and discussed it and I heard things like “empty cellar” and “sagging lower lobe” and other unflattering descriptions of things that caused me increasing alarm.  Then Dr. Davé left and Dr. Kofahi began a battery of questions.

He concluded anyhow that the (very slightly) sagging lower lobe of my brain (!!!) must be pressing against that nerve and causing the problem.  And that there was nothing he could do about it since it wasn’t serious enough for surgery and that he was going to treat it symptomatically for now and recheck in a month, repeat the MRI in three months and sent me home.

And so, when people ask me what I found out, I really don’t know what to say.  I can’t remember the terminology for what this ailment is.  I’m a bit amused by this diagnosis.  I mean, there’s a LOT of things sagging on me these days, why wouldn’t my brain?  I’m a bit aggravated by it all, because it feels more like an “Aha!!!  This is what it must be since I can’t find anything else, and maybe she will go away and it will get better on its own and I hope it does because I really have no idea what is going on here” kind of diagnosis.  That isn’t very nice of me, because he has a reputation as a great neurologist.

I just don’t know what that business is about an empty cellar in the middle of my head, and it isn’t nice to say someone’s brain is sagging.  But the most overriding opinion that it isn’t life threatening or terribly serious.  Inconvenient?  Yes.  Uncomfortable?  Yes.  Make me want to cry from the weariness of it all?  Yes.

But today, Certain Man and I made a joyous trip to Jeff’s Greenhouses in Bethel, Delaware, and had a wonderful time choosing some beautiful plants for the plant hangers in our pavilion, and bought a few incidental for my front barrel.  Spring has come to Shady Acres, and I think I can be distracted from this strange feeling in my face that makes me feel like “Old Lady Half-face” enough to get some planting done.

There are so many wonderful things right now to celebrate.  Some are not mine to share; most are just the everyday glory of living.

Like a springy, small bouquet on a kitchen window sill: 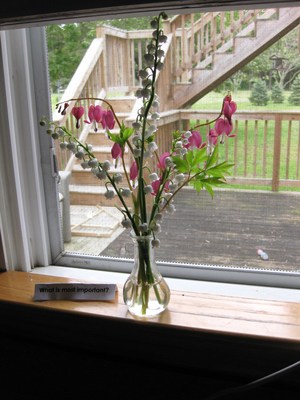 Cheery flowers at the front door: 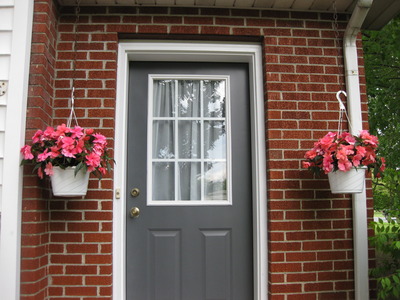 A pretty hanging bag beside the garage door: 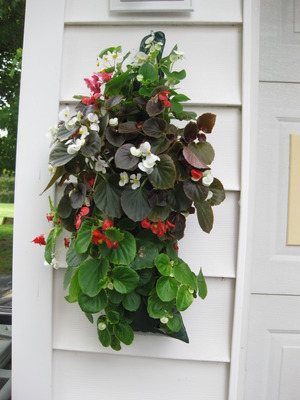 A wren house that was a gift from Youngest Son and his Girl With a Beautiful Heart
that Certain Man placed at the top of this hanging bag to discourage the resident wren
from appropriating the new flowering bag for her nest again this year. 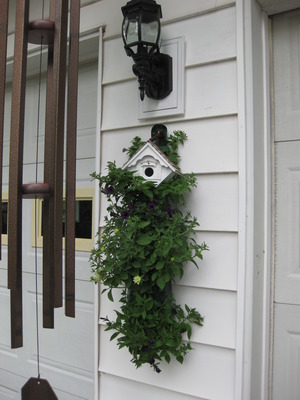 And the pretty New Guinea Impatiens in the pavilion: 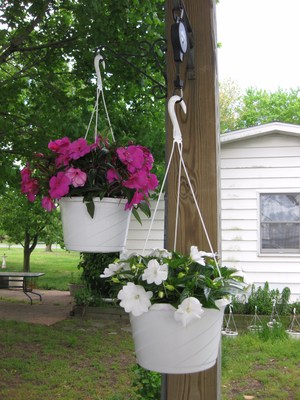