“Mom, you never make Swedish Tea Rings anymore,” said Middle Daughter on an afternoon in November.  “You used to make them every Christmas, but we haven’t had them in years!”

“Maybe this will be the year I get that done,” I said.  “We can certainly try!”

“You always say that,” she said, “but it seems like we just never get to it.”

“Okay,” I said.  “This year will be different.  I promise to make Swedish Tea Rings some time over Christmas this year.”

She didn’t say it, but I could tell from the look on her face that she was a bit skeptical as whether this would ever happen.

When I was a young wife, one year around Christmas I stopped over at the home of our neighbors, Earl and Alice Yutzy.  They lived down the road from us and I knew some of their daughters.  Alice was up to her elbows in baking on that particular day, and I was intrigued with the beautiful round pastries that she was turning out.

“They are Swedish Tea Rings,” she answered.  “I make them at Christmas to give away.”  The rings were set around her kitchen in various stages of completion.  Some were rising, some were just baked, some were iced, and she had even decorated some of them with red and green candied cherries, cut and placed to look like Christmas greenery and berries or flowers.

I was young and foolish and impulsive and over-confident.  “Could I have your recipe?” I asked her.  “I would like to try to make them.”

I’ve often wondered what she thought.  If I had known how much trouble they were to make I would have: 1) Understood why she only made them once a year, and 2) Never attempted to even begin to make them.  But Alice was, first and foremost, gracious.  She was also encouraging.  And I watched her make those tea rings, and I called her one day and scribbled down the recipe on a page in our local phone book that didn’t have much on it, and I learned how to make tea rings.

There came a day when my paper was almost unreadable, and I wrote it in a recipe book that was just for writing down personal favorites and that is where I was able to keep tabs of where it was when I needed it. 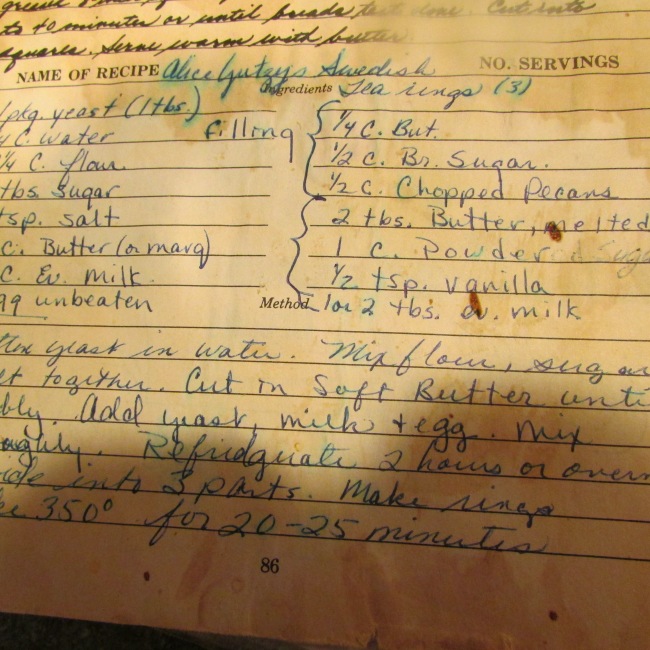 This season has been busy.  Certain Man finished his village a full three weeks later than usual.  There are some of my Manger scenes that haven’t even gotten up.  Those that have made it up through the faithful help of Middle and Youngest Daughter.  At the back of my mind, though has been this promise about making Swedish Tea Rings this year.  On this gloriously quiet Christmas day, I decided that there was no better time than now to get started.  And so, I DID!

There were some very confused and worried moments while they were mixing because I forgot a whole cup of evaporated milk that the recipe called for.  But I put it in and it all mixed up very nice.  Then I weighed everything else, dividing the dough into individual pieces so that I knew exactly how much dough would be in each ring.  Then I weighed and divided the filling so that there would be the right amount for each ring, and I wouldn’t have to guess.  I set these on a sheet of waxed paper, close at hand. 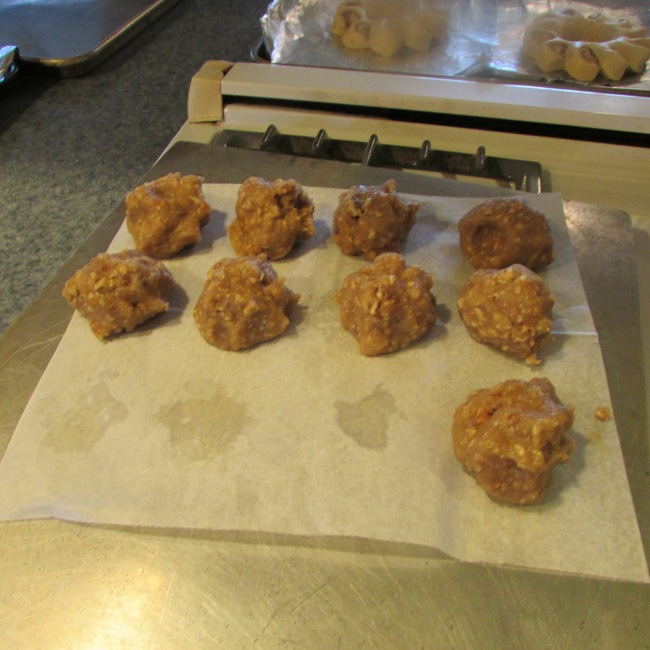 When everything was completely ready, I set to work.  The dough had to be thoroughly chilled, so I put the first ones into the freezer while I finished weighing everything out.  Then I got the first pack and the greatly simplified assembly proceeded.

First, I rolled the dough into a rectangle, approximately 9″X12″– 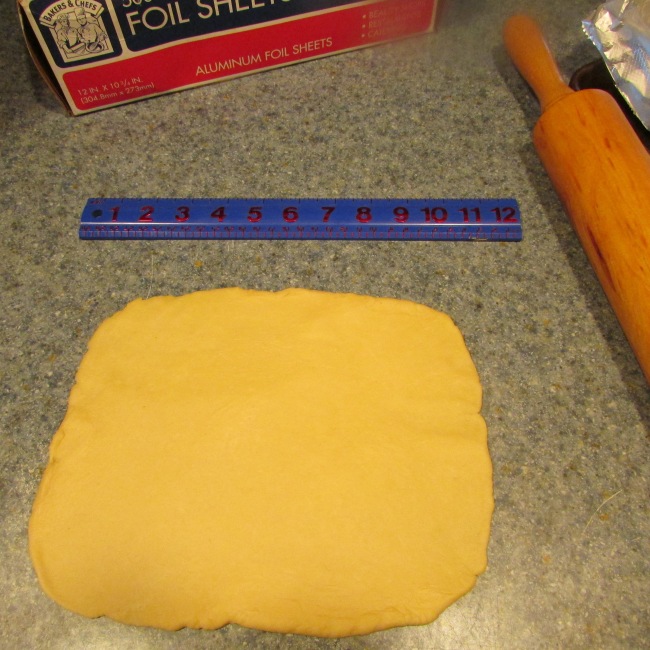 Then I took one of the premeasured filling portions and spread it over the dough like this: 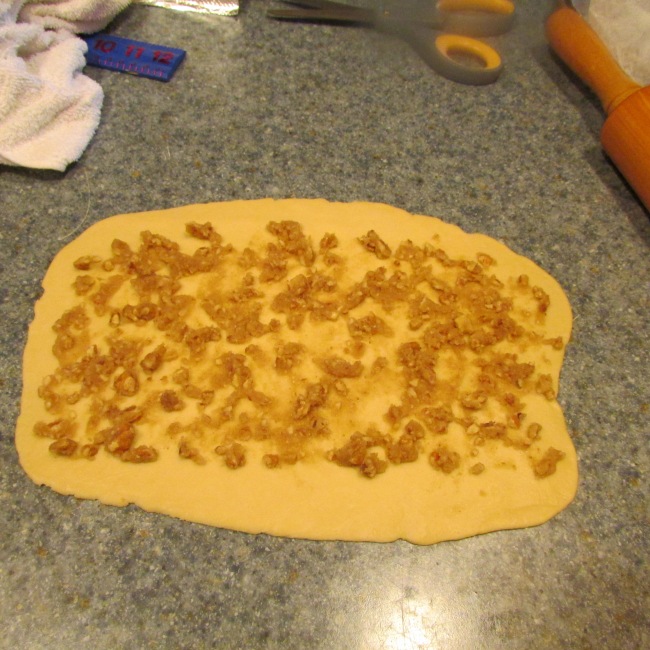 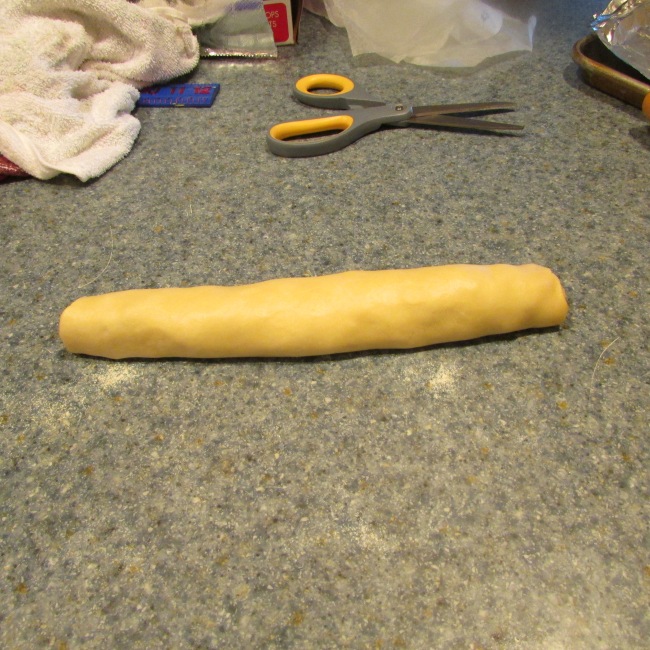 And then joined the ends together to form a circle like this, and placed it on a sheet of foil that I could transfer it to a cookie sheet. 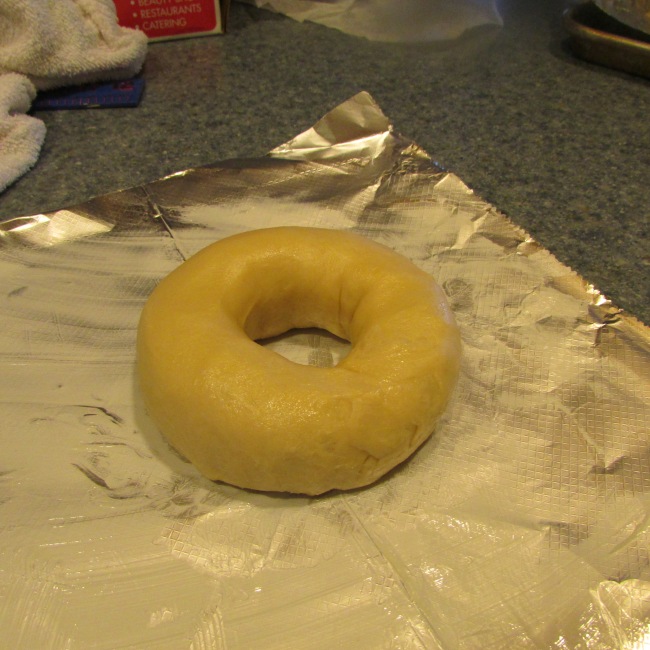 This next process is one that took a very long time for me to understand and learn to do.  The instructions were to make cuts all the way around the “wheel” like this: 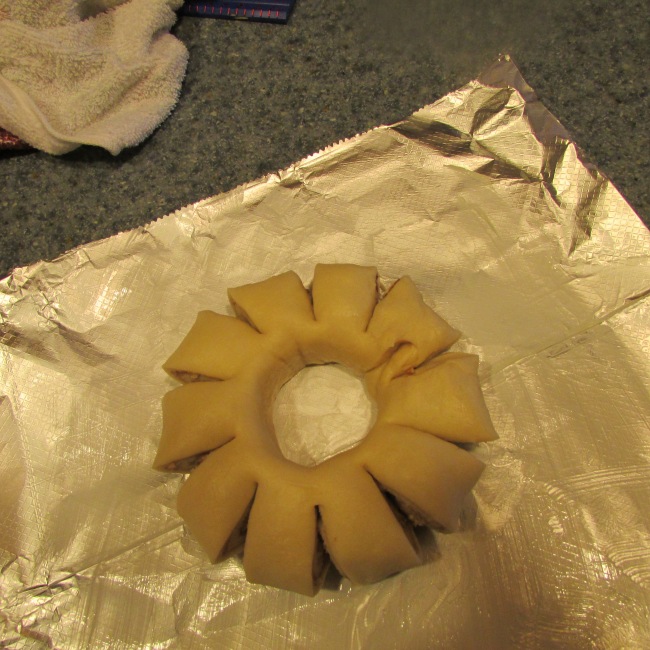 Then the trick is to carefully take each section and turn it gently on its side like this: 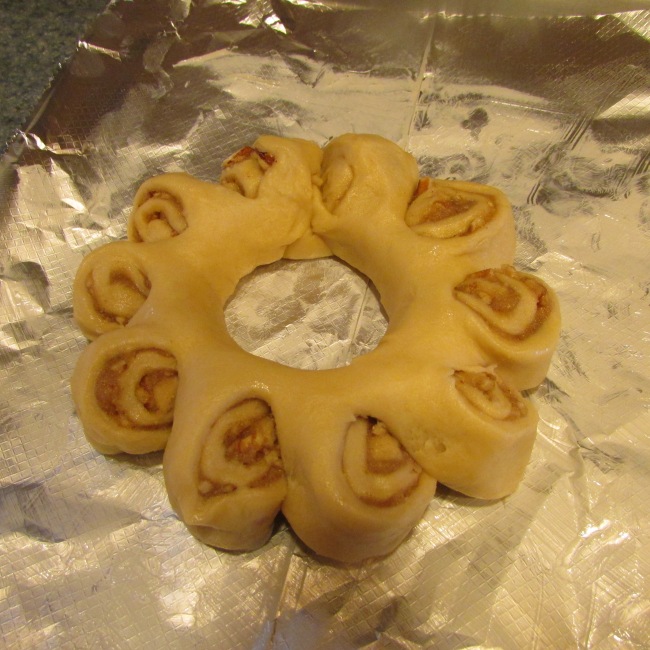 Then the creation is allowed to rise for about an hour — less if it is really warm in your kitchen and more if it is chilly, then it is popped into the oven at 375 degrees for about twenty minutes and it comes out looking all brown and good, and we put icing on them and they look like this:  Ready to eat or give away, or package for later. 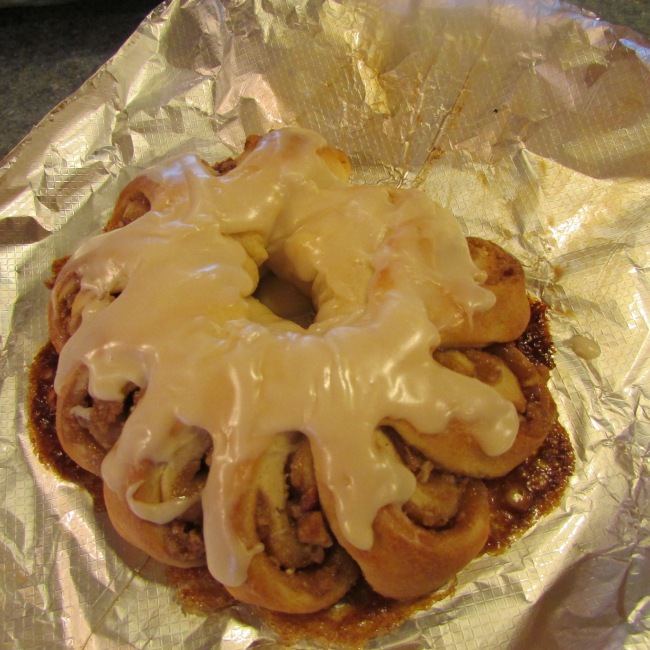 Alice always had beautifully proportioned and perfect looking things.  Mine usually taste okay, but I just cannot match the perfection that I still see in my mind’s eye when I think of hers.

But my family say they taste as good as ever.  They have been effusive in their praise.  I don’t think they taste quite right, but I cannot say that out loud.  They forbid me to complain about the food that I make.  They said that I am never satisfied with food I make.  Which is pretty much true.  I think that something is wrong with my taste buds.  Nothing ever tastes quite right.

I think it must be something that comes with six decades of overuse.