Aside
↓ Jump to Comments

And now for another diversion . . . 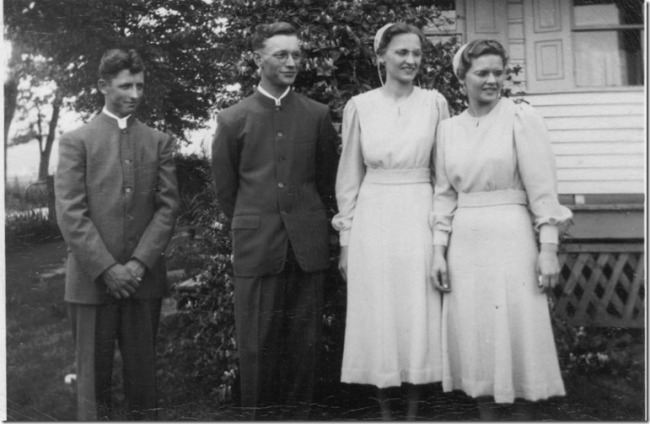 Today is the 67th anniversary of my Aunt Orpha and her husband, Lloyd Gingerich.  My Sweet Mama and her boyfriend, a very young Mark Yoder, were their attendants.  This picture always makes me laugh.  Daddy looks like he really isn’t comfortable being too much involved in the wedding party.  But oh!  How I love the youth and the happiness and beauty of these two gals and the angular ruggedness of the guys.  Daddy was 17, Mama was 18.  Their wedding was a mere 28 months away.

Mama was here for lunch today, as it sometimes works out.  Josh and Lawina (Sarah Jane’s son) pick her up for church and then, whenever we can work it out, she comes home with us and then I take her home after lunch some time.  She was very sleepy today.  Looking at the picture of the four of them — thinking about how time just keeps marching on, and sometimes feeling really pensive about how things keep changing, makes me look for a bit of levity in my life.

And I got at least a diversion today. At my own expense.

The temps in Delaware have been borderline — almost too warm to not have AC on, but also almost cool enough that we want to try to make it without. Daniel’s sister is living in our yard right now in her motor home, and she HATES to be cold, so we have been erring on the side of natural ventilation here in the old farm house at Shady Acres since she does spend a good bit of time in the house.  This morning, I had toyed with the idea of asking Daniel to close up and start the AC because I knew the oven was going to be going the whole time we were at church.  But then I decided I could manage it.

One response to “And now for another diversion . . .”