So, I have a story for you.  I know I’ve been very quiet, and there has been some really stellar posts that got lost in some “busy hands, busy heart” kind of days.  Some things were drowned by an overwhelming sadness over a number things, and some were just crowded out by the stuff that needed doing in these busy days of summer.

As some of you may know, we were in Ohio with Raph and Gina and the three hooligans. We Then went to Indiana to see Certain Man’s Aunt Katherine Yutzy (“Aunt Kay” as she is known to her numerous nieces and nephews). From there, we came to Plain City for a family reunion at Rosedale.  This particular reunion happens every three years and Certain Man has been on the planning committee for a number of years now, and so it has taken priority over the last decade, although I don’t remember a time when we’ve intentionally missed it.

Certain Man had been greatly concerned about the weather forecast since it was calling for hot weather at Rosedale, and we were going to be rooming in the dorm where there is no air conditioning. His plan was to buy a small unit that he could take along with us to use while we are there.  He considered it for a few days and we discussed it at length, and then he had the bright idea that maybe Mark, Jr. had one that wasn’t in use at the rest home that he could borrow to take along for the weekend, so he called and asked about it and in due time, Mark said he could have one that was at Holly’s house but wasn’t being used. (At least that was our understanding.)

So Certain Man went out and fetched it home and set it in our new shop overnight where no cat would mark it and no person would steal it and where it was off the floor and SAFE.  He looked at it somewhat dubiously and wondered if it was too heavy or too big for the windows at Rosedale Bible College, and then asked me if I would look for something at the local Walmart in my late dash that night to pick up last minute things.  So I checked, but there was nothing but a vast array of empty shelves, silent tribute to the hot, humid weather that had hit Delaware over the last few weeks.  This sealed his decision to take the borrowed air conditioner along.

So Sunday, after church and lunch, Certain Man loaded our trusty van with all the things that were needed for our trip, and then loaded the air conditioner at the very back of the cargo bay, and carefully closed the gate.  Finally, around 1:30, we were headed to Ohio. It was a terribly hot day, with temperatures registering over 100 for several hours on the trip, and never getting below 90 until after sundown. We ran into all sorts of traffic and took some wrong turns and even went through downtown Pittsburg. 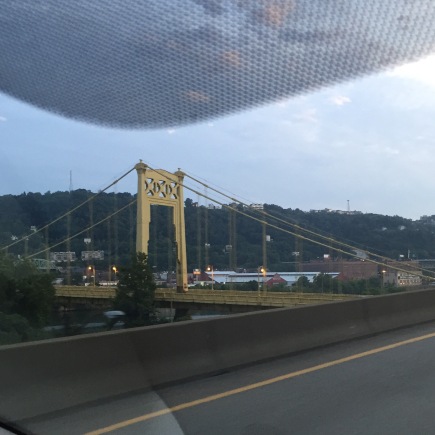 The car AC didn’t missed a beat all day and things were comfortable in the van.  We were quite pleased with ourselves and our plan for continued comfort in spite of the heat.  When we parked at Raph’s, it was still in the high 80’s.  It was so late that we grabbed only our necessities and locked the car and soon called it a night.

The next morning, we put on the clothes wehad worn the day before for travel for the first part of the morning.  Both Raph and Regina had morning appointments, and Certain Man and I were granted the glorious opportunity to watch the three boys.  Soon after breakfast, Certain Man decided that he was going to see what he could do around the yard and went out to the van to fetch his familiar grey coveralls.  He soon returned with a wrinkle to his nose.

“Hon,” he said rather irritably, “Something stinks something AWFUL in that van!  I can’t figure out what in the world it could be!  It smells like something dead!”

I had my neighbor and good friend, Sharon, detail the van for me before we left, and it had been as clean as a whistle. We hadn’t taken any snacks or anything along that should have been stinky so I was as perplexed as he was.  I followed him out to where he had left the back end of the van open and, believe me, the man wasn’t imagining anything!  It smelled pretty awful, indeed. The air conditioner sat there in all its innocent glory, but I eyed it with suspicion.

“Do you think it might be the air conditioner?”  I asked.

“Well, I wonder,” said Certain Man.  He got down close and sniffed the openings!  “It really smells pretty bad right here,” he said.  “I think there’s something dead in there!”

“Yeah, but I don’t think they’ve been using it. It smells like a dead mouse to me!”

“But this was hanging outside the window, Daniel. How could it have been a mouse?  Do you think maybe a bird?  Maybe a bird had its nest in there or–”

“I’m gonna take it out of this here van and first chance I get, I’m gonna take it apart and see what I can find!”  And he proceeded to haul it into Raph’s garage and put it on a table and there it sat for the rest of the day while he weeded garden and snoozed and went to a grandson’s t-ball game and ate soft ice cream at a local shop and then talked with his son and finally slept the night.

On Tuesday morning he set about with his three grandsons, !four males on a mission) searching for screwdrivers and a hammer (A hammer? – I don’t know!) and Certain Man tore into that thing and behold! He found the source of the great offensive smell buried deep within the internal chamber of the unit.

It was a very dead FROG!

Great was the commentary of the three hooligans. And poor Certain Man had an interesting time retrieving the carcass, replete with maggots. “I thought it was moving, then I realized it was the maggots!” He told me.

And of course, the boys told the story with sound effects and great glee, including, “. . . and Grammy!  There was worms in it!”

“. . . and Grammy!  Grandpa had to put his finger in it when he was getting it out!  Yuck!  Ew-w-w-w-w-w-w!”
Certain Man persevered, in spite of the gross-osity.  He cleaned it out and made sure it was bereft of any traces of the unfortunate animal. He borrowed some Yankee Candle air freshener so spray it down, put it back together and turned it on!  It worked!  He let it stay on the table in the garage to air out, and on Wednesday morning, loaded it into its place in the back of the van, and we set off for Indiana.  There we visited his aunt, Katherine Yutzy, who lives on the Campus of Greencroft Communities in Goshen.  We helped her with a few errands, had supper together at Ponderosa, and then visited for a while in her pleasant room. 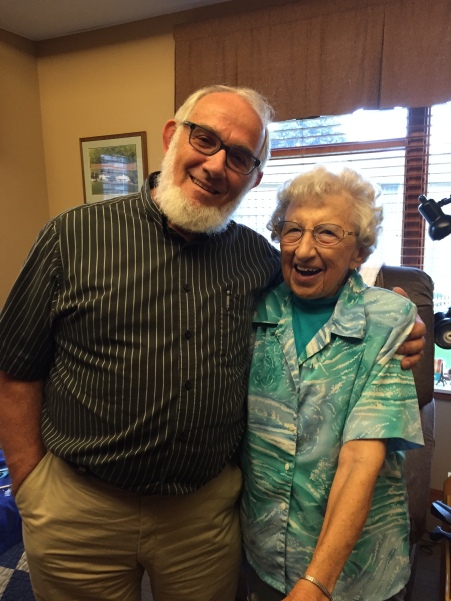 We spent a most enjoyable night with a cousin and her husband, Karen and Steve Miller, and on Thursday came to Rosedale where the weather was hot and exceptionally muggy.

Once again, Certain Man set to work first thing and checked to see if the air conditioner would fit the window in our selected room.  Glory be!  It did!  He turned it on and it cooled our room in no time flat.  And it didn’t stink.  At all.  We’ve slept in cool comfort at night and have had some respite during the days when the heat and the humanity – I mean, the humidity gets a little unbearable.

And that is the news from #Grandpa&Grammyintheminivan.

One response to “Certain Man Tries to Stay Cool”