I just realized that it’s been quite a while since Delaware Grammy has updated her blog.  There has been plenty to write about, what with having several adventures and a bonfire/hayride and birthday, then a wedding, church retreat, siblings gathering and a baby shower.  Life keeps marching right along for the folks at Shady Acres . Chicken Farm.  Whatever.

Early in the week before my birthday, my fine sisters, Sarah and Alma, and I went on a little bit of a getaway.  Honestly, I don’t think we have EVER done this before.  Just the three of us, telling nobody but our husbands and any necessary family members needed to hold things together in our absence, we took off in the morning on Monday and came home in the evening on Tuesday.  We shopped and talked and laughed and cried, we went to a motel in Bind in Hand and spent the night.  We got up the next morning, had breakfast on the same grounds as the inn, and went to a play put on by the Bird in Hand Stage in the same big building that we had breakfast.  Alma had heard about the production from her mail carrier, Diane Breeding, and thought it would be fun for us to attend.  The motel, breakfast and production was Alma’s gift to Sarah and I.  You can read all about it here, (but it’s getting awful late to get in to see it.  They are stopping production on October 28th.)  https://bird-in-hand.com/stage/mennonite-girls-can-cook/

After the production, we did a bit more shopping, first at the outlets and then at our favorite store — Goods.  And then it was time to grab a late lunch and get on home.  Which we did!  I’m so glad we could go.  But, as usual, I was so glad to be home again.

So, after being gone for two days, there were things that needed doing.  Appointments and prescriptions and catch-up.  I needed to go into Walgreens one afternoon to pick up a prescription, and decided to do some early Christmas shopping for stocking gifts.  I had been to the pharmacy, and was pushing my cart around, when I heard a furor at the front of the store.  I didn’t pay much attention, because there is often a hullabaloo in that store for some reason.  One of the last times I was in, the place was up in a heaval over a shoplifter who had gotten away, but was known to the store, and the police were there and it did seem as if there was a bit more publicity of the details than was necessary (but I didn’t know all the dynamics, and maybe there was a whole lot more than they were saying).

For whatever reason, this particular uprising didn’t pique my interest much as I motored about the store, looking for – well – stuff!  As I got closer to the front I began to overhear snatches of conversation that caused me to get curious.

“Yes, but another customer got a license tag number, and the color and make of the car!”

Then someone in the conversation mentioned “gray van” and I decided I had better investigate.  I was driving that “gray van, parked right outside.”

I stopped at the checkout and said, “Is there some sort of a problem?  I overheard something about a gray van, parked right outside?”

The Clerk was obviously relieved.  “Is that your gray van right outside the door?”

She couldn’t wait to tell me, “Someone ran into it and didn’t even stop, but the manager has the license plate number and color and make of the car and  – Hey, —–!  Here’s the lady whose car was hit!”  She hollered down to the photo department.  “Go on over there,” she said to me.  “She knows about it.  She’ll tell you!”

I looked at my cart and decided to park it.  I couldn’t bear to go look at my van.  I decided to go over and talk to the manager.  Of course she was waiting on a customer, and so she said that she would be with me in a minute.

“Is it bad?” I asked over the shoulder of the customer (who didn’t look like he cared a bit).

“I don’t know,” said the manager of Walgreen’s Milford.  “I haven’t gone to look, but the customer seemed to think it was important to pass on the license number.  Just let me finish here and I will go with you?”

“Do you think we should call the police?”

“I’m going to go and assess the damage,” I said.

“I’ll be right there,” said the manager.  “Just as soon as I finish up here.”

I put my cart by the door, took my prescription that was already paid for, and went out.  I was already thinking about what I was going to tell Certain Man.  I wondered if I could drive it home.  I steeled myself for carnage and destruction.

My Silver Chariot sat stoically exactly where I had parked it.  I couldn’t see anything on the driver’s side that warranted any dramatics.  I walked around the end.  Still nothing.  I examined the passenger’s side with a great scrutiny, but could not find anything at all.  By the time I was searching the unscathed surfaces for about the third time, the manager was out, waving the white piece of paper.

“Find anything?” She asked cautiously.

She joined me in another round of “Ring Around The Vansie,” and then started looking for anything less obvious that would explain the hubbub in the store.  Finally she stopped at the back bumper on the driver’s side.

“Here,” she said, a bit doubtfully, “I wonder if this isn’t it.”  I came around to where she was peering at the area with intent.  I still couldn’t really detect anything there.  My puzzlement must have shown on my face because she pointed to a fingernail  clipping sized nick in the bumper’s paint and a small brush beneath it.  I moved in close to inspect, wiped the dust off and looked up at her with relief and a sudden crazy sense of hilarity. 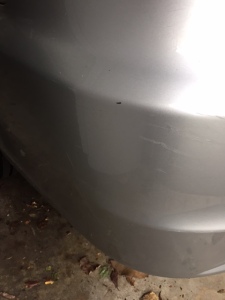 “Um, this isn’t anything at all to worry about,” I said.  By then, other people who were a part of the exchange inside had joined us.

“They said it was an old lady driving,” one man volunteered.  “I’ll bet she didn’t even know she hit you!”

“Well,” I said, ruefully.  “I’ve done a whole lot more damage to the front bumper by just driving into my garage too far.  This isn’t anything I’m going to do anything about.  It’s not worth it to call the police.  It’s not worth it to try to track down who did it.  As far as I’m concerned, there just isn’t really any damage at all.”

There was general agreement around the circle, and then the manager pressed the paper into my hand where the license number and color and model of the car had been written.  “If you decide to do anything different,” she instructed, “please call within the next two to four weeks so that we can go back on our camera and get any information that you might need.  Like, if you get home and find more damage, or decide that you want to do something about this.  Of course, depending on your deductible, you would still have to pay more than it’s worth.”

I looked at my trusty minivan (who has been our faithful replacement of the old white one that I thought I wanted to keep forever) and laughed.  The Silver Chariot was not bashed in, totaled or in any need of our faithful body shop, Start2Finish Collision over there in Harrington, DE.  I was truly giddy with relief.

“Nah,” I said to the concerned lady.  “I’m not going to do anything about it.  It just isn’t worth it!”  I stuffed the scrap of paper into my purse, and went back into the store and checked out my purchases and headed my undamaged van towards home.

I got to thinking on the way home about the people who had saw the incident and had been so zealous to report it.  I wondered what made them so conscientious to report it.  Had someone damaged their vehicle sometime and not stopped?

And that reminded me of another story I had read years ago (probably in the Readers’ Digest) about a woman who came out of a place of business and found her vehicle damaged extensively.  She was terribly distraught until she noticed that there was a scrap tucked under her windshield.  She gratefully grabbed it out and read.

Dear Sir or madam.
I am responsible for damaging you car.
Right now there are a number of people
watching me carefully to see what I’m going to do.
They think I’m giving you my name, address,
phone number and insurance information in this note.
I’m not!

(I promise you that she wasn’t so grateful for very long!)

So any way that you look at it, I had the best end of the deal.  I had a car with no damage, and if I would have had damage, the good people of Milford, Delaware, were looking out for me.