Sunday morning.  I have been sick for a number of days, tired out and coughing.  This is some kind of “crud” as I’ve heard it called, and seems to be highly contagious. But I am better, (somewhat) and I have a Sunday School Class that I am loathe to lend out.  Besides, there was a special activity that was in the lesson, and I thought that my three girlies, Victoria, Katie and Charis, would enjoy it.

The activity was a treasure hunt.  Not a hard or complicated one, but still fun.  So I schemed and planned and printed out the clues in a mad rush because I hadn’t allowed enough time on this crazy morning.   Then I got a text that Charis was sick and wouldn’t be there, so it dropped to two girlies.  That was okay.  These two would be fine.

I was able to get the clues out before class started, and all was well.  At the beginning of class they did the usual things; attendance, prayer requests, prayer, and then I introduced the plan.  “There are four different clues,” I told them.  “Take this envelope and go down to the table in the open area to open it and then do what it says.”  There was a brief discussion over who did what, but then they went happily off to their assignment.  They left the door open and I could see them down the hall.  They eagerly tore open the envelope and pulled out the first clue.

H-m-m-m-m-m-m.  I listened to the discussion.  It was going nowhere fast.

“Are you girlies having some trouble?” I finally asked them.

“We can’t figure this out!” said one of them, frustration lacing her voice.

“Yeah,” said the other.  “This doesn’t make any sense!”  Back they trudged, holding the offending paper.

“Oh,” I said.  “I gave you the wrong clue!  Here is the right one.”  I handed them the next clue and they eagerly tore into it.  This was something they could understand.

Off they tore again, down the hall and into the upstairs bathroom, emerging triumphantly holding the next clue.

(I had to do the correcting because Loretta decided that she was going to move her class of “Littles” into an empty classroom, but she said they could just come in and get it from her, so that was set up before hand).  I heard them knock and heard her cheery voice as she gave them the fourth and final clue,

Back down the hall they came, opened the closet door and there on the shelf were white bags with their names on them.  (Like this, except this is the one that Charis didn’t get.) 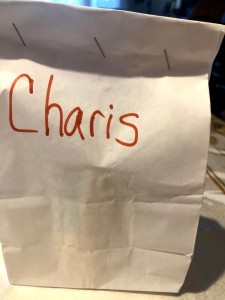 They came cheerfully into the classroom with their precious sacks and set them on the table, smiling and eagerly opened them.  But the smiles turned wooden and the faces fell. 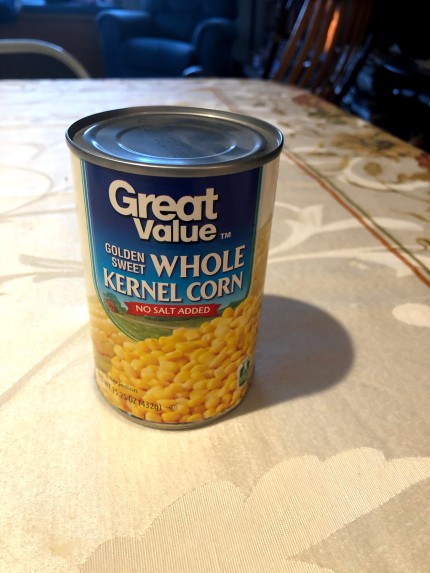 “Ah, corn,” said Victoria, surprised, but brave and gracious.  “I like corn.  Corn is good.  It’s one of my favorite things.”  She looked at it carefully, a bit nonplussed but trying hard to be grateful.

I said, “So what do you think?  Is that a nice prize?  Was it what you were expecting?”  I looked at their faces.  Katie was very sad.  She really didn’t like this prize at all and she wasn’t going to pretend otherwise.

Victoria was looking very tenuous, like the longer she thought about it, the more disappointed she became. “It’s not exactly what I was expecting,” she admitted.

“So why did you follow my directions when you could tell that I gave you a bad clue at the beginning,” I asked.  Even as I asked it, I thought about how much effort I had put into having these girlies trust me, and how much I wanted them to ALWAYS trust me, but I also wanted them to THINK about clues that directions maybe should be carefully thought about before they followed them.  “Why did you follow the clues.”

“You are so right,” I told them  “I said that I had prizes for you, and I do!”  I reached into my trusty bag and brought out a plastic bag for each of them that I had prepared ahead of time for this very minute (I really didn’t want them to think I was a bad leader!)

In honor of our current autumn season, it was all in fall colors.  A Reese’s peanut butter cup, a new Eversharp pencil with 1.3 sized lead, and a new double ended highlighter.  Their delight was gratifying to see, and I said, “Can I have my corn back?”

“You sure can!” was the general consensus, as they shoved them back over the table.

“It didn’t even have salt!” said Victoria.

“AND it was way expired,” I said, laughing.

“Yep, REALLY expired!”  I told them.  “I would NEVER have given you gals this for a prize!”

And then we went on to talk about peer pressure and bad influences and how “Twelve Men Went to Spy out Canaan, Ten were Bad, Two were good.” (Katie, with her clear, true voice sang the whole song for us and did the motions, too!)  We talked about how easy it is to follow the majority and how important it is for us to listen to what God has to say.  We need to think about His faithfulness to us in the past, and sometimes we have to stand alone – or with the minority when what God has to say flies in the face of what most people are saying, doing, thinking.  They had read our “Bible Words” and had wise input and thoughtful answers.

We finished the time together with two extra students, Phillip and Isaac, and then we ran out of time (as usual).  They all went scrambling down to their “snack time with the Daddies” and I picked up the mess that was left behind and thought about the morning.  I always wonder how much they actually get.  I’m always glad when the teachers’ manual has something like this that works with my class, and that I can maneuver around a bit to involve each of the students.

And, of course, I thought about adult peer pressure and how it still affects me as an older Grammy and wife and mother and sister and cousin and friend and teacher and neighbor.  The issues are real.  And there are some things upon which I have purposed to not expend energy.  . . . I almost wrote down what some of those are, but then I would start a furor, and I’m content to not do that.

“Ten Men Went to Spy Out Canaan,
Ten were bad, two were good.”

Even the terminology of that song is in question these days.  (You don’t call people “bad!”)  However, I’m reminded by this timeless story that we cannot always go with the majority, no matter how Godly we think they are.  We need to come back again to what God says, how He has worked in the past, and be discerning as to what He is asking of us now.

Even if it’s just you and me on one side and ten bad men on the other.