The days are classic, the nights are splendid, the trees are turning and the garden is almost done.  Certain Man carried the first bag of pellets into our house yesterday morning and started a fire in the pellet stove.  Twenty-four hours later, it has burned itself out and that is okay for now.  It will feel good again tonight, though.

The shelf at the top of the ramp.  H-m-m-m-m-m.  I guess it could use some clearing off.  At least if we are going to put pellets there anytime soon.  He built it so we could store pellets at an easily accessible place, but in the summer, when the shelf is so empty and inviting, a whole lot of things get put there:  Extra bird suet and seed blocks, plant fertilizer, an amish made wren house in need of repair, insect spray, an extension cord, garden trowels, an oil bottle, a mysterious large yellow liquid fertilizer container that says “Raph” on the side and is some sort of orangish yellow liquid that I have no idea what it is — and the box where I keep old newspapers in an orderly fashion.

“In case someone might need them,” I tell Certain Man when he looks askance at my stack.  Well, you never know!  Someone just might need them!  (By the way, if anyone does, I have two boxes of flat, neatly stacked newspapers that I will give away free if “someone needs them for something!”)  🙂 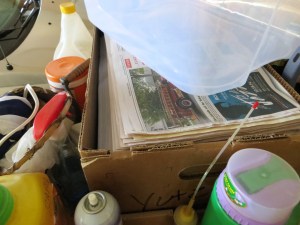 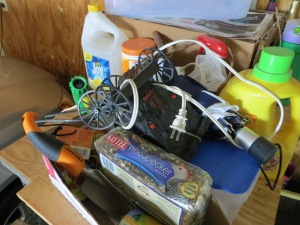 He looked doubtful when I said that I could maybe get to it, and then he went off to work, and in my more energetic moments, I pondered about adding it to my day.  I decided that I could handle it.  So, I got busy and decided to clean it all off. And I kept after it — doing bits and pieces now and then, in between loads of laundry, going to the wash line, taking Our Girl Audrey for blood work, sorting through tomatoes and making supper.  It wasn’t really all that huge a job, but I had to find places for stuff, recycle some stuff and decide what fell into which category.

But I got it done.  Right after the last load in the dryer sounded its final ding!, I finished the last little bit.  And now, it looks like this–! 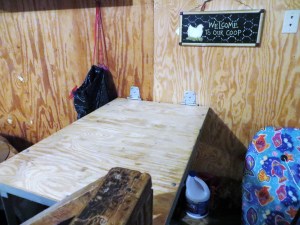 Although he hasn’t acknowledged the transformation, I’m sure he has noted it.  And Certain Man can bring in those bags of pellets and stack them up whenever he gets the notion.  We can light that old pellet stove any time the temperature drops down, and it will be so cozy and good.