It was two of the kind of days that seldom come at the end of July.  Cool, breezy, and so nice for the jobs at hand.  We worked in the refreshing coolness on Friday, making short work of over 1200 ears of gorgeous Delaware Sweet Corn, named (appropriately) “Incredible!” by some foresightful agriculturalist.

“I don’t remember ever having this nice a day for doing corn,” I said repeatedly to my sometimes skeptical co-workers, members of my family that are suckers for this kind of punishment on an annual basis.  They would look thoughtful.  Some agreed and some did not.  But no one could dispute the fact that it was almost perfect..  We finished in good time and put things aside for the 750 ears that would be coming the next morning.

Saturday.  By 9:30, a familial crew descended upon the grounds of Shady Acres and we got those 750 ears done and all cleaned up by three o’clock.  It was, again, a wonderful day .  The weather was almost as wonderful as the day before, the company was good, and the camaraderie was so sweet. It felt really good to have the year’s supply of corn in the freezer.  Then everyone scattered — taking the freezer bags of corn home to their own freezers.

Certain  Man, who had been working on his sermon, came outside to do the final washing and put the pavilion and driveway back to order.  I carried the clean wash baskets, muck buckets, pans, knives and put them away.  The afternoon sunshine was dappling down through the shade in the side yard and the pavilion’s cement floor was clean and wet. 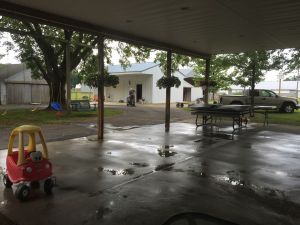 There were loose ends in the house to round up, and there were several loads of laundry from the morning still hanging on the line, warm and dry from the long hours it had spent there.  I stirred around in my house, started a bleach load of laundry from the day’s gathering and loaded the dishwasher.  I put away the corn utensils, pots and pans and felt that deep, deep satisfaction of a good day’s work.  I still needed to retrieve my dry laundry and do some Saturday night straightening, but I kept landing on my chair and taking breaks.

A little before seven, the phone rang and it was Eldest Daughter.  “Mom, did you know that Lem and Jess are stopping on their way home from the beach?”

“I had texted him, Chris,” I said, “and asked if they were stopping.  I hadn’t heard back.  I decided they had just gone on home.  I might have missed something, though.  My phone was almost dead and I have it plugged in.  I may not have heard.”

“Well, he said that he told you guys that they were going to be there around eight.”

Certain Man picked up my phone from the phone booth where it was charging and said, “Oh, yes.  There is a message here.”  He read it.  “It says they are going to be here around eight.”

Around the phone receiver, I mouthed to him,”Tell them it will be fine!”  And then went back to Christina and learned that the Alexandria Yutzys were hoping for some burgers on the grill.  That was fine because there was still nothing decided upon for late Saturday Supper.  Eldest Daughter was making some zucchini bread, and we decided that she should bring that on down to the oven at Shady Acres to bake and add to the late night snack.

And so the happy evening passed.  Burgers and fresh tomatoes and lettuce and garden tea and other snacks pulled from the pantry mixed with the smell of baking zucchini bread and a pot of Dolcés Jamaican Me Crazy Coffee.  I looked at this small gathering and was grateful for the gifts of this day.  The conversation and laughter and stories and the smell of good coffee wrapped around me with the love of those gathered there and I counted blessings.

Then, in the middle of it all, the phone rang.  I was surprised to see the phone number of my sister in law, Polly Yoder, appear on the caller I.D., and even more surprised when I answered, and it was my brother, Mark, Jr. on the other end.

“Mary Ann!  How are you this evening?”  It was my brother’s voice, subdued but strong.

It was Polly’s voice as well as Mark’s that answered.  “Well–”  “We aren’t so good–”  “We’re feeling kinda’ sad this evening.”  And I heard the tremble in one of the voices.

Bravely, one of them went on.  “We just left Jeremy and Cheryl’s.  They got the results of the testing for Jase.”  I felt my stomach tighten.  I felt like I couldn’t breathe.  “. . . and Jase is positive for SMA.”

SMA.  Spinal Muscular Atrophy.  Our family already knew enough about this terrible genetic disorder. Jeremy and Cheryl’s sixteen month old daughter had the same disorder and, after brightening our lives for what seemed but a moment, flew home to Heaven one April night in 2014.  It is difficult to put into words how the days that marked her short live affected us all.  She had a smile that could light up a whole room, a deep affinity for her family that was a result of being known and loved and cherished and tenderly cared for all the days of her life.  Her short life spoke joy and value and God to us all.  It was the hardest of times.  But the valley was ablaze with GRACE and GLORY and HOPE.

Jeremy and Cheryl, their two sons, Max and Boaz, and Mark, Jr. and Polly and the rest of their family finished strong.  Their Anchor did not fail them.  And when we heard that there was another baby on the way, we all prayed for a healthy child.  It seemed like it would be the right reward for their faith and for their faithfulness in the storm that would have destroyed so many others. God gives good gifts to his children, doesn’t He?  He’s promised the desires of our hearts when we delight ourselves in Him, and delighting themselves in God has been the heart cry of this family.  I cannot erase the sounds of Cheryl’s voice, lifted in unmitigated praise and trustful relinquishment in a small church in Baltimore where we gathered to celebrate Ariel’s life.  There was a small white casket, and this brave young mother exalted a God who could do no wrong, who was worthy of our praise, even when we couldn’t understand.  Surely God would reward/honor that kind of faith.

He should, shouldn’t He?

He would, wouldn’t he?

Jase Marius was born exactly a month after his great grandmother went to Heaven.  July 16, 2015.  9 pounds, 9+ ounces. Beautiful. So incredibly beautiful.  I looked at his pictures, and searched for any clue of SMA.  I prayed that the testing, done once he was born, would come back totally clear.  I thought of all the things that would indicate it was okay. The truth is, SMA isn’t immediately evident, and all the looking to see signs that all is well in the first days of life won’t really reveal anything.  But I really thought it would be.  I thought it had to be.

But now, I couldn’t escape this report, these results.

Mark and Polly and I talked for a little bit.  The conversation around the table had stopped when my side of the conversation had indicated something was terribly wrong.

“Did somebody die?” Hissed Christina anxiously.  Out of the corner of my eye, I saw a very anxious Charis hovering at my elbow, listening intently.  I shook my head, and tried to reassure them, but they knew that there was some sort of bad news.  My heart ached for Mark and Polly and their family.  My heart ached for this old world where the very state of being human begs for Redemption.  These disorders of genetic nature happen because we are a part of a world where things can go so wrong — Sometimes because of our sin, or because of our wrong choices, but often because we are mortals and subject to the laws and accidents of this natural world.

And now I sat, the reality of what this little guy and his family were facing, crashing over my heart while the tears streamed down my face.  But we have a six year old granddaughter.  She was obviously troubled by my distress.  She sidled up to me and threw her arms around my neck.  I took her on my lap and felt the warmth of her healthy body.

“Grammy — what will happen to the baby?”

“I don’t know, Charis, but I do know this, that his family will love him, and Jesus loves him and He can heal Jase.”  Her eyes were earnestly seeking mine.  “But Charis, if he does go to Heaven, just think about it!  Grandma Yoder will be waiting right there to just snatch him right up and hold him and squeeze him.  And that will be wonderful, too.”  I fought back the catch in my throat as I tried to think of hopeful words for her.

And so the evening passed.  Lem and Jess left for Alexandria, Charis went home with her Daddy and Mommy.  Certain Man went to bed so he could get up and finish his sermon.  I folded laundry, stirred about and thought and thought and thought.  And cried.  Deborah came home from Shakespeare in the Park and helped me clean the kitchen and we talked about life-important things.  Mostly about trusting God when things aren’t the way we want them to be.  About letting Him be God when it feels like everything is out of control.  About knowing that He is ruling and reigning and controlling, even when we hate what is going on.

After midnight, I climbed the steps to bed, took my shower, washed my hair, and finally slept.  The morning was here before I was ready.  I came downstairs to organize the morning, and it felt like a cloud was covering everything I did.  I stood at the counter, methodically counting meds and getting ready to get Nettie and Cecilia up and ready for the day.

“Oh, Lord Jesus!” I was going over the same row for the umpteenth time. “This looks so big, so hard, so overwhelming.”  The tears kept falling and I felt so incredibly sad.  “I thought your promise was that this child would be okay!”  Somehow the words settled into my anxious heart.  “Okay???  Are you saying he isn’t ‘okay?'”  “I know, but we asked for health!  And you could have made it that Jase was born without SMA!”  Then the words from Jeremiah 1:5 kept coming insistently to my head.  They were so strong that I finally went and looked them up.  I heard what God was saying to Jeremiah and I knew that it was true for this much prayed for, much loved, much anticipated Jase Marius.

The other verse that was cross referenced from this verse was this one: “I saw (Jase) before (he) was born. Every day of (his) life was recorded in (my) book. Every moment was laid out before a single day had passed.” Psalm 139:16 NLT

God’s eyes are on this family for good.  He is neither surprised nor dismayed; neither stymied nor baffled.  This is hard.  We don’t understand. But He is God!  He has a plan.  He can be trusted. He is worthy of our praise.

And so, today, this heavy heart will choose to give HIM (grateful) praise.