I am eagerly awaiting the return of Certain Man.  His flight was to have landed in Baltimore at 10:45 pm, and then he will be on his way home, Lord Willing.  From all reports, he and his sisters had a profitable time in Ohio.  And I am so grateful.

This is Daniel’s father, on the steps of their house in Plain City, Ohio.  Autumn, 2005 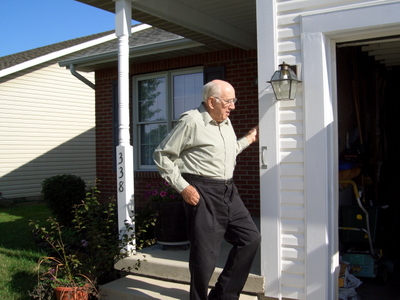 Daniel and his Mom getting ready to load his Dad into the car.  They have already loaded his beloved scooter. This picture was taken at the same time as the previous one. 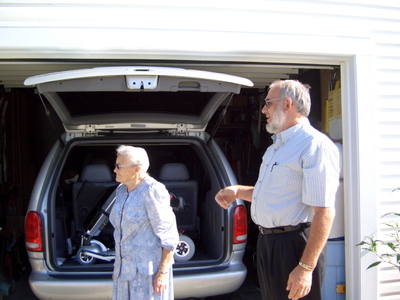 This is not a family member.  It is, in fact, one of the famous troublemakers that is even now, residing (at least partially) in our freezer.  The trouble I had this weekend came from a relative of this one that was much, much smaller.  I wonder what sort of injuries I might have sustained if I had tangled with this critter. 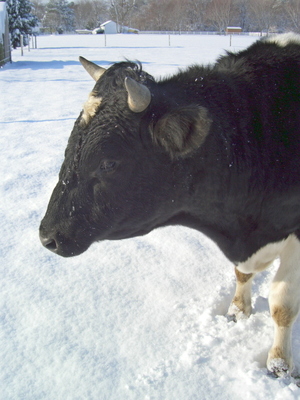 The final chicken check has been made, the cows have been fed, the other animals have been checked, and I am about ready to call it a night.  (I don’t know if I can sleep, though.  It’s funny how family things can keep a Mama’s heart awake and pondering when she should be asleep.  Which is why I am boring all of you to death with this trivia!)
************************
On another note, there was an accident tonight just down from our house.  A fellow that appeared to be intoxicated ran into the back end of someone else.  Then decided it would be better to flee than to face the music.  Middle Daughter, home with Linda, received a phone call from out neighbor who warned her to lock the doors as the aforementioned person was making his getaway across our lawn, headed towards the barn and chicken houses.
Alas, I missed all this action as I was attending a Pampered Chef party with Eldest Daughter.  When we came home there were many police cars and lots of activity going on.  I was informed that they had caught the fugitive (or it may have been one of those nights when the chickens did not need checking!) but there was much excitement to recount. Beloved Son in Law, who was here working on the computer, had taken it upon himself to make a quick check of the outbuildings for me before I got home, and pronounced everything clear.  So I really did not feel scared to do the evening chores and checks even though it was dark.  (I did wonder what would happen if an intoxicated person got tangled up in our electric fence.  Do you think it would sober him up?  Would we be liable somehow if we hadn’t posted signs warning of the electric fence?  Could someone be seriously injured in this manner?)
Oh, yes, one more thing — my “pitchfork injuries” are doing a whole lot better.  Thanks for asking!  (I am not going to post a picture, though.  My Sweet Mama thought the last one was a little bit indecent.)