The music on this site was a Mother’s Day gift from Eldest Daughter.
If I was writing this song, I could have had at least a dozen more verses!
I love you, Christina!!! 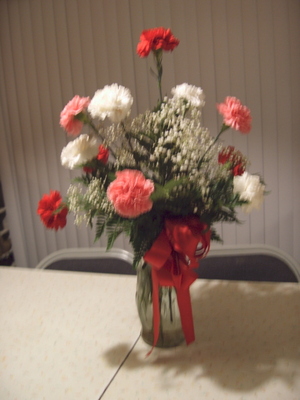 There was a time when Certain Man tended to ignore Mother’s Day.
“You’re not my mother,” he would say with a hint of defiance.
It should not have mattered.  He brought flowers for Valentine’s Day, Anniversary, Birthday and even if he just thought that I was having a bad day.  But when Mother’s day came around, it was always the same story.
“You’re not my mother!”
Of course, I knew that.  We have never called each other “Daddy” or “Mama” unless we were talking to our offspringin’s.  (As in, “What does Daddy say?”  or, “If Mama says you may, then you may, but otherwise, ‘NO!'”)  So, perhaps there were things that fed into to his decision.
But yesterday, Certain Man brought me flowers.
Says I to Certain Man, “For Me?  For What?”
Says Certain Man with a deprecatory shrug, “Mother’s Day!”
“Really???  Remember, I’m not your mother?”
“I know, but you are the mother of my children!!!”
You know what?
HE GOT IT RIGHT!!!