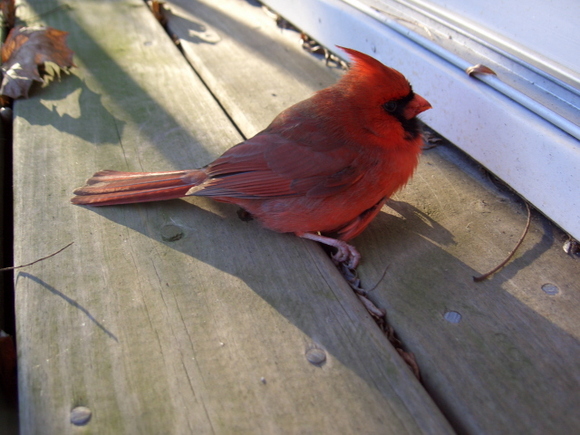 Yesterday,  a Cardinal flew into the glass of the sliding door.
He was addled.  I was afraid he would die.
I posted Carson and Nevin to watch for the outdoor cats who were prowling around
And I prayed that the red bird would gather his wits about him and fly away.

I gave him some time, then slipped out onto the deck and took his picture.
I hoped that my presence would spur him to escape.
It didn’t.
I came back in to commiserate with Eldest Daughter concerning his fate.
The little boys were divided in their opinions.
Carson worried.
Nevin banged on the window, trying to scare him into movement.

About 20 minutes had passed, and he still sat there in a stupor.
I knew that I needed expert advice.
So I called Certain Man and asked what I should do.
“Should I put him on the platform feeder?  What should I do?”
“Put him on the far side of one of the hanging feeders where the cat cannot reach him.”
Now that was great advice.  Why didn’t I think of that?

I eased open the sliding glass door and snuck around the edge.
He looked up with unblinking black eyes.
Suddenly, he spread his wings and got airborne.
He wobbled and made funny flight patterns
Then took the very first branch he came to.
We watched, rejoicing from the warmth of the family room
And he settled in for a good long rest.

Such a beautiful bird.  I’m so glad that he recovered.