It’s been a nice day at Shady Acres.  The whole family, minus Oldest Son’s Ohio Heart Throb, was here for lunch.  The Very Marrieds, the Newly Marrieds, and even my Sweet Mama.

We were celebrating the birthday of Oldest Son, who will be 26 tomorrow. 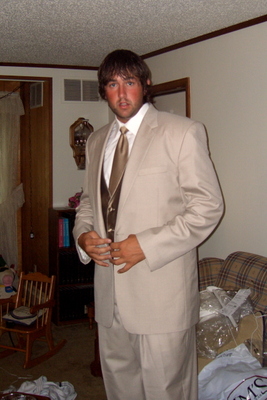 He got to choose the menu.

Steaks on the grill

I remember with clarity the day he was born.  It was a Wednesday, and Certain Man had taken me in to Mt. Carmel Hospital in downtown Columbus (Ohio) sometime mid morning.  They almost sent me home, then decided to keep me.  It was the days of Lamaze, no invasive monitoring, nothing for pain, and the day wore on and on.  Along about three o’clock in the afternoon, when the doctor said that I was still only 3 cm’s dilated, I had had just about enough, and asked (shocking!) for an epidural.  They were ready to do that, but wanted to put an internal monitor on the head of our unborn baby before giving me the epidural.  To do that, they needed to rupture the membranes.  Certain Man asked if things were to go fast following that if I would have to have an epidural.  I didn’t even want him to ask that.  I wanted it before they did anything else!!!

To make a long story short, our 9 pound, 12 ounce baby was born ten minutes after they ruptured the membranes (without the coveted epidural) in the labor room bed, and at great cost to his mama, but it probably saved his life.  For sure it saved his cognitive skills.  He had a triple cord wind — twice around his neck, and then going around his chest, under both arms.  He tried to cry, but he turned blue immediately.  I didn’t know a baby could be that blue and still live.  I wanted to hold him.  The attending doctors said, “Just a quick hug, Mom.  We need to get him to the newborn ICU.  He’s in a little trouble.”

I don’t remember really believing that anything was wrong with my beautiful baby.  He was fat.  He looked pretty good immediately after birth, even though he went downhill pretty fast.  Besides, we had picked a name full of hope and promise:  Raphael:  The Lord has healed.

I was probably just not thinking.  For sure I was euphoric.

They took him to the NICU, and they took me to the Delivery room to attempt some much needed repair work.  Certain Man trotted back and forth between the NICU and my room.  His eyes were worried, and it didn’t take long for a prayer chain to get activated at our church.  The hospital called the pediatrician from across town. There was rush hour traffic and she had trouble getting there.

She walked down to my room after assessing him and said, “I couldn’t believe they had brought me all the way across town for this fat beautiful baby!  I said to them, ‘What is the emergency?  This baby looks great!’ but then they took the oxygen off him, and he immediately started to turn blue.”  She reassured me that she thought he was going to be alright, but that he would need to have some cultures run, and that they would need to watch him closely for three days.  She thought he may have ingested some amniotic fluid, but also allowed that the “precipitous birth” had kept the air passages from being cleared like they should have.

And he was just fine.  He had some urgent emergency room visits before he finally got grown up (skull fracture at five weeks, pitchfork stab and infection at five years, tubes in his ears, a deep cut to his wrist that narrowly missed the artery) but he is pretty healthy for the most part, and I certainly haven’t seen him that color since those minutes right after he was born.  I used to refer to him as my “Saint Bernard Puppy” when he was younger because he was always laid back, gentle and comfortable to have around.  And now he is all grown up and getting married.  He is still laid back, gentle and comfortable to have around.  I know we’ve had him longer than many people get to keep their sons, and so I am grateful for every day we’ve had, even while wanting to stay the days until he’s gone.

The thing is, the days can’t go fast enough for him.  In a strange way, that comforts me, too.  It’s time, I guess, and his Daddy and I have known all along that the time we have with our children is an inestimable gift, and one that we cannot take for granted.

So here’s to your 27th year, Son.  It is my prayer that it will truly be the best year yet.