“The steel belts are showing on my pickup tires!” Announced Certain Man cheerfully this morning.  “Do you think you or someone could take them over to Cook’s for a pair of used ones for me this morning if I took someone else’s car to work?”

Certain Man’s Chevy S-10 pickup has almost 200,000 miles on it.  The air conditioning doesn’t work, and it is quite dirty from all the farm work it is pressed into.  The daughters of Certain Man refer to it as “Stinky” and the name has stuck.  “Do I have to take Stinky?” they will say and sigh when the need for wheels presents itself and there is no other alternative.  The thing is, Stinky has automatic transmission, so two of the three daughters have to take Stinky if they need a spare vehicle and the choice is between a stick shift and Dad’s pickup.  Certain Man is partial to his pickup.  He roars up and down the road to work and manfully sports the bumps and oddities presented by the aging vehicle and proclaims the usefulness and virtue of the little machine when it comes to the gas prices.  And, of course, it is paid for, so that makes it even more attractive.

Since everyone headed out except Middle Daughter who has been home with some sort of a bug for over a week, Certain Man’s Wife decided that she could run the truck to Cook’s for the tires as soon as Our Girl Nettie got on the bus.  So she headed out and came into the Fair Town (pun intended, Delaware folk) of Harrington.  The technicians said it would be 20-25 minutes, so CMW decided to cross the street and visit a little shop that has seen quite alot of change over the past ten years.  It had housed the Harrington Pharmacy for many a year, then was a gift shop, then was a teacher supply store and now is a combination gift shop/health foods store/teacher depot/deli/coffee house/restaurant kind of thing.  She browsed among the little things that were here and there, and found quite a number of country sayings and interesting items.

And then, in the middle of the muddle there was this plain wooden plaque: 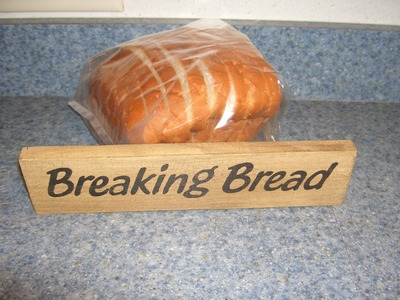 CMW felt this jolt somewhere in her chest, and she could hear her Grandpa Yoder’s voice, telling her Daddy about being invited for Sunday dinner to a friend’s house.

“We been invited to Renzie’s (Lorenzo and Polly Schlabach’s) to eat bread!” he said delightedly in his familiar crackly voice.  It was how he often spoke of eating a meal with friends — either at home or in a place to which they had been invited.  Always with joy.  Always with anticipation.

Certain Man’s Wife snatched the little board up and held it in her hand and felt a strong desire to put this somewhere in the big old house at Shady Acres to remember his words.  She turned it over.  $2.50.  That was affordable.  So she paid her money and brought it home to sit on the blue kitchen counter.

“Eat Bread.”  What a familial way to speak of sharing food with people we care about.

Come on over.  We’ll break (and eat) some bread.