I said good-bye to an old friend on Saturday.When I was about eleven years old, My auntie offered me the old piano that had been at their house for years and years. I wanted to learn to play piano. My desire was to get as good as my cousin, Bonnie, who could play for crowds while they sang, and it looked so wonderful. I was probably just looking for the attention, more than anything else, but when my Aunt Freda said that I could have their old one, I was elated.It rode from Wilmington to Greenwood on the back of a truck. Not an easy or gentle ride. It was big and black and ugly, but it played, and the tuner said that it was a “diamond in the rough” and that was enough for me. Especially after my Sweet Mama and Oldest Brother spent a day with paint remover and uncovered a beautiful piece of furniture under all that black paint. 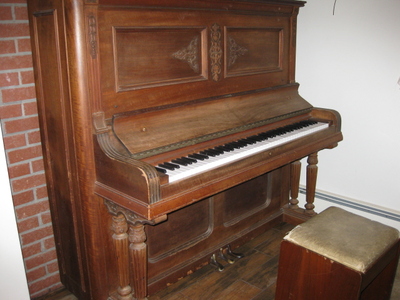 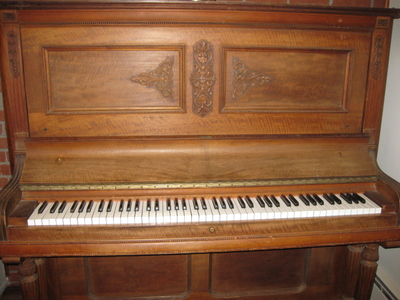 I couldn’t bear to watch as they slid it out of the living room and onto the waiting pickup.  Yes.  It rode out on the back of yet another pickup.  “Aw, Mom,” said Oldest Son tenderly.  “You really feel bad, don’t you?”  He hugged me against his strong chest and patted my shoulder.  “You’ll be okay, Mom.  But I know it is hard.”  That made me cry some more.I felt like I was betraying a friend, and it tugged at my heart more than I ever dreamed that it would.   I kept telling myself it was all so silly.   After all, It was just a piano.  All over this world, there are far greater losses than an old piano that isn’t worth fixing.  And that causes me to think about what is really important to me.  What are the things that cause me to bend the proverbial knee of my carnal heart?  Why can’t I recognize those behaviors and things that make me want more when so many people in this world have so little? I don’t think it is wrong to enjoy things that make memories, bring us pleasure, allow us to share, etc.  But this old piano has made me do a lot of thinking about holding things dear to our hearts that aren’t eternal.  What we’ve been given can become so important to us when in fact, it is a tool, entrusted to us for the sake of the Kingdom.  And it is right to use things to make memories, draw people in, share with them the good news of Salvation.  But things should be a means to an end, not the stuff we hang our hearts on..“You can get another one,” say the soothsayers.“No, I can’t,” is my standard answer to that.  “There isn’t any other piano that is worth the money when it doesn’t have the history, the memories that this one did.”  Maybe I need to rethink that.  I don’t know.  That old piano isn’t somewhere feeling rejected.  It isn’t troubled by the way Certain Man felt about it or the decision to get rid of it.  It bothers me, but it doesn’t bother the piano.  It won’t shed a single silly tear if we decide to replace it.  And the things we always used it for are still a part of our lives, of our plans for the future.I guess there is a place for another piano at our house.  I just don’t know if there is space.

14 responses to “Another Story”