Poor, Poor Certain Man!!!  They took out two wisdom teeth today.   This was maybe the fourth trip to the dentist that he has made in his LIFE.  And he is doing pretty well, but it makes me shiver.  I went along to drive him, prayed mightily whilst he was in there, and was relieved when he came smiling out.  However, the bleeding isn’t stopping as soon as I think it should, so I’ve been staying pretty close to home today, keeping an eye on him, changing the gauze, and trying to think of things that he can eat.  I think he is feeling better tonight.

The point of all of this is this:  His village is still up!  He is pretty much going to be home the next few days.  If you would like to see the village, it would be a good time to come. 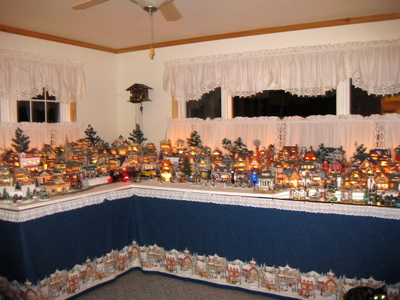 He plans to take it down by the end of January.