Today, Daniel’s office mates had a “Grandpa Shower” for him. We caught him entirely flatfooted.  He had no idea.  At all.  Woo-hoo!  We almost never surprise him, so this was really fun. 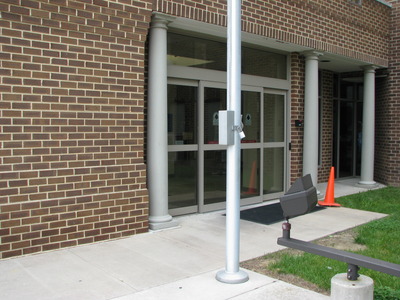 This is where we’ll go in.  I wonder if he suspects by now. 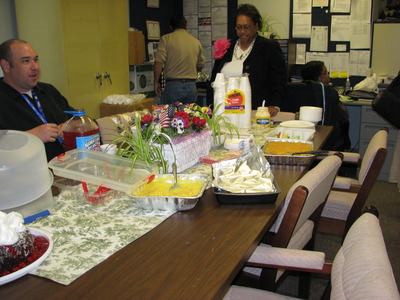 He knew there was going to be “breakfast.”
I had even made sausage gravy for this occasion.
He had dutifully carried it in when he came at 7:30.
He thought it was to celebrate Margaret’s birthday.
Ha! 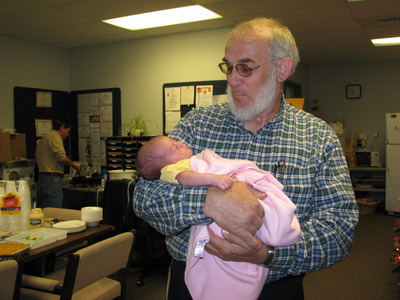 He was mighty surprised.  I had a difficult time sidetracking him. He called me at least three times this morning.  The first time, I was still at home, but sitting in the car in the driveway. After that, I was on my way to Dover when the phone rang.  It was Deborah.

“Mom, Dad called and wanted you and I didn’t know what to say.  I told him you were on the way to Dover.  He wanted to know why, but Cecilia’s bus was here, so I told him to call your cell phone.”

“Alright, Deborah.  I’ll just see if he calls.”  While I was talking to her, Mama beeped in, so I went to talk to her.  Then Christina’s phone rang.

Before I was off the phone, Christina’s phone rang again.  It was Deborah.  She said that Daddy was trying to call us, and he was getting just a little bit aggravated.  So I called him.  Decided I would take the initiative and try to settle things down.

“I’m with Christina and the baby.”

“To Dover with Christina and the baby.”

“I thought you said that you were going to be home today.”

“No, I didn’t.  I said Christina was coming down and we were going to do some things.  We are on our way to Dover to pick up some stuff for the baby.”  (That was true!)

And so I diverted him, and he really was none the wiser.  When we walked into the office, he was in his cubicle, working. 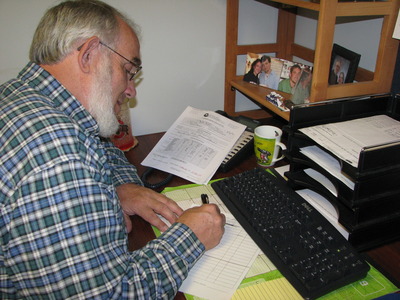 He looked up to find us there, and he was more astounded than I have seen him for a very long while.

“What are you doing here?”  He said delightedly.  He had been wanting us to bring the baby up for them to see ever since she had been born.

“Well,” I said, “I hear tell that there is a “Grandpa Shower” here this morning.”  He couldn’t believe it, but it really was true.  I guess he just didn’t think they would do such a thing for him.  He is so silly!  Of course, they had to pass the baby around.  Not everyone was comfortable holding it, but there were some who were delighted for the chance! 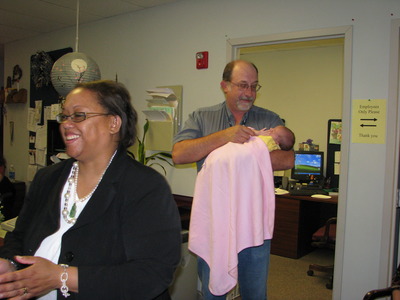 Lawson is a grandpa of three, but he actually has a son that is younger than one of his grandchildren.
He knew how to hold a baby! 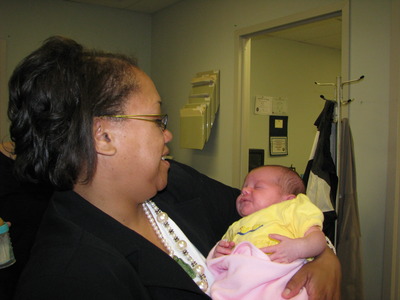 Daniel’s boss, Dana, is crazy about babies.  She has two little girls of her own.

Charis got a little fussy, so there was some “Mama time.” 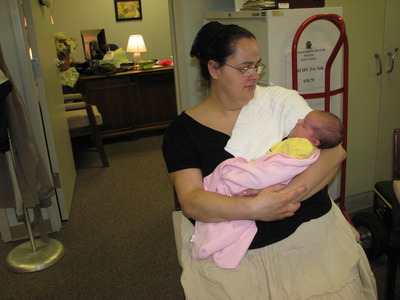 And then some more arms that wanted a snuggle. 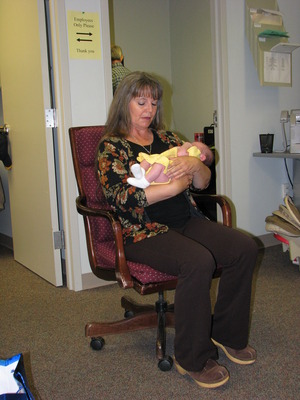 Bea got a turn 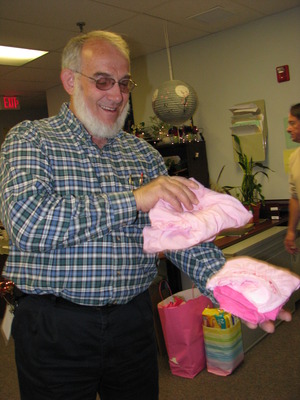 Then Grandpa got to open some presents — little outfits,
Bottles, diapers, baby wipes, teething toys, etc.
Such a precious assortment of things for Grandpa to have at his house.
It was a really special idea. 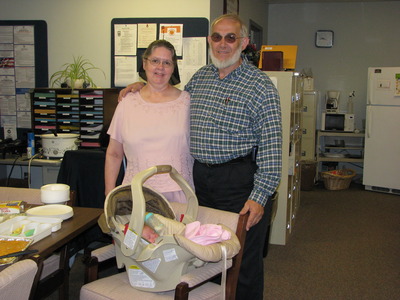 Before we left the office, Daniel’s boss took a picture of Grandpa and Grandma.
By now, Charis was sleeping, so we didn’t take her out to hold her for the picture. 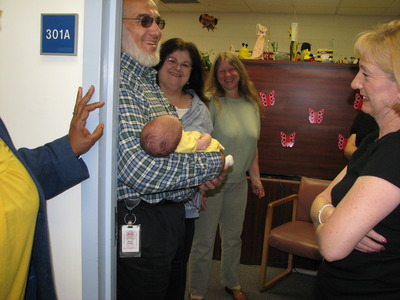 We made a quick stop over at the public health nurses’ office, and
Grandpa proudly showed him off to his friends there. 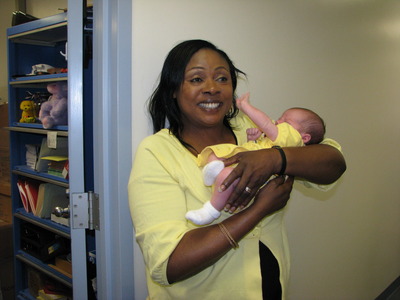 Some of these friends join us for the Christmas open house, and they
have been praying for this baby, too.  Ekwe was delighted that she and Charis “matched.” 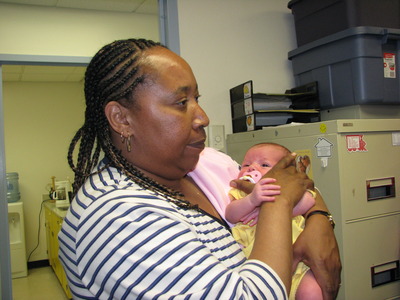 And Lois almost didn’t get a chance to hold her, but she came by,
unstrapped her from her car seat and held her for just a few minutes.
Lois is a very special lady, and she is unusually good with the babies
that are in and out of public health.  Today I saw her with a teenage
mother who had a baby with a “rattle” in his breathing.  She asked a
few questions, listened, gave tender advice and reassured the very
young mama.  I was impressed with her gentleness, expertise and
ability to relate.

It was a wonderful day.
What special people we encountered today.

And now, it is off to bed.
Tomorrow is the great
POTATO SALAD MAKING EXTRAVAGANZA

I NEED A GOOD NIGHT’S SLEEP.