There is another story that I wanted to tell from our weekend with Nelson. 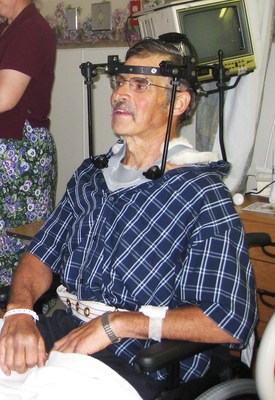 Two days after Nel was moved to rehab, he kept feeling like something wasn’t right with his halo.  They would look at it and reassure him that it looked like everything was okay.  But Wednesday night (May 20th), after Rose had gone to her room for the night, the pin on the right side suddenly slipped.  I had thought that these pins actually went into the skull, but they don’t.  They are sharpened pieces of steel — sorta’ like very sharp nails, that are held to the skull by pressure.  Suddenly, the one slipped out of place, taking the skin above Nel’s eye with it.  The pain was unbelievable.  Nelson said that the sudden release from pressure was a terrible thumping noise, and the resulting sensation in his head and neck was felt like he had fallen out of bed on his head.

Of course, that was when he went back to Geisinger Medical Center in the middle of the night and spent the night in the emergency room.  They numbed up the skin on his forehead, and replaced the spikes, but were unhappy with how it was, discussed the fact that the brackets had been put on “backwards” and took everything off again and turned the brackets around, and replaced the spikes to their satisfaction.  Nel was wishing that they would have put him out for that, but they didn’t think it was necessary, and so he was awake for everything.

No one can explain why it is that his breathing difficulties started then, but they did.  It was almost immediate with the trauma of the pins/spikes in the halo letting go.  But be that as it may, his chest was really hurting and he couldn’t get a deep breath, coupled with the fact that things in his back, neck and forehead were really throbbing.

When they finally got everything done, they decided to send him back to the rehab center.  Rose had ridden along, and they made her ride in the front of the ambulance.  There was an attendant in the back, but he was pretty much in his own world, doing his own thing, and Nel was on the stretcher.  He said that the pain was almost unbearable.  He was feeling every bump and it seemed the driver was finding every bump there was.  And he was feeling so very much alone.  In his pain-filled loneliness, he began to cry out to God.

“It was the strangest thing,” he said.  “I was lying there, and I saw God come through the roof of that ambulance with His arms outstretched to me.  He came down to where I was and He wrapped those arms around me and held me close to Himself.  And He had some things to say to me.  He said, ‘Nelson, I’m with you.  And I will never leave you.  I suffered alot for you.  I gave my life for you, and there are some things I’d like to say to you'”  Nelson said that he felt the Lord was asking him to be more ready to share what God has done for him, to be quicker to speak of God’s love for the people around him.  Some of those things are personal, between a man and his God, but the thing that blessed me most was that Nelson said, “I felt God’s arms around me all the way back to the rehab center, holding me tight.  I never felt another bump,”

God continues to meet us where our needs are.  I was talking to my orthopaedic guy today when I got my fourth Sinvisc shot in my knee.  I was telling him about the way things have gone with Nelson, and about the blood clots, and how things got missed on that first day.  He is a Christian and he is so interested in this whole situation, but when I told him about Nelson coughing up blood, and then there being “significant amounts” of blood clots in his lungs he shook his head and said, “He is so fortunate to be alive!”  Every now and then I take those things out to look at and thank God again for all His mercy to us.

John Greenleaf Whittier said “For all sad words of tongue and pen, The saddest are these, ‘It might have been’.”  I’m sure you will understand me when I say that it seems to me tonight that these are the words of hope and faith and healing.  We are so blessed.  When I think what might have been, all I feel is grateful praise.