Some pictures from this wonderful day:

One of my friends came in the other night, her baby on one arm, and in the other, this beautiful gift– 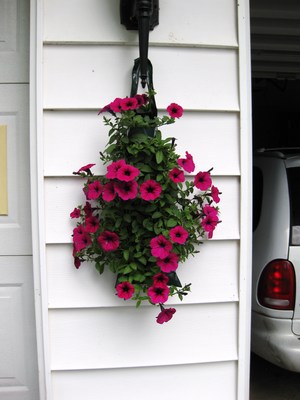 I cast about to see where I could hang it and this seemed like a good place.
Certain Man hung a hook right away, and it is so pretty.

Today our married children and their spouses were here for lunch.
Charis gets more and more personality every day.
She has learned to blow spit bubbles. 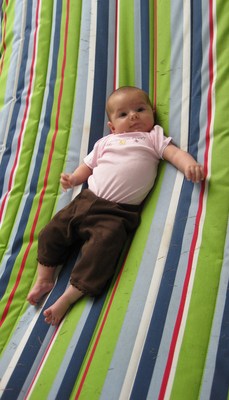 Her mama put her on the hammock and she enjoyed it. 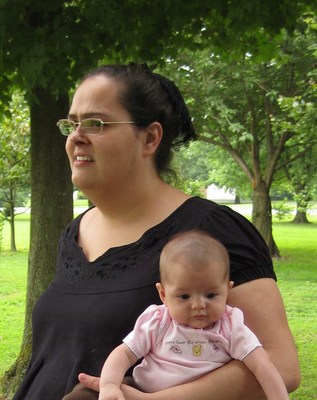 Of course, there is no place quite like Mama’s hip to see the world!

Christina and Charis were watching the boys play a new game.
Ryan Kauffman made this game and it is quite a hit. 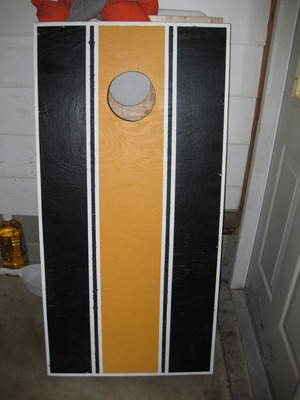 It has the glamorous name of
EDIT:  “Cornhole”
and the object is to toss corn bags through the hole
from a great distance away.

Here are a few pictures I took this afternoon while the boys were playing: 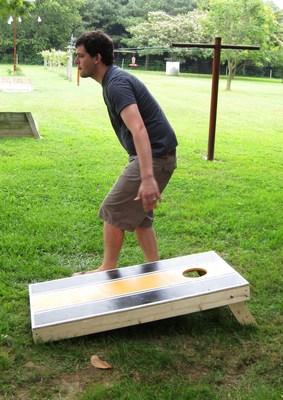 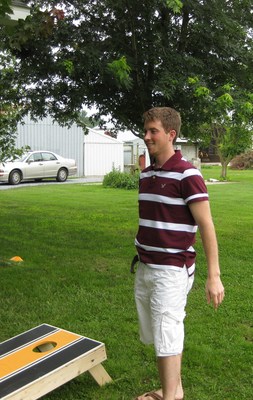 David looks to see if his latest effort meets with success!

Jesse, Raph, Lem, Gabe, David, and Ryan made up the three teams.
And I, impartial as I am, cannot remember who won —
But it was still fun to watch!

After everyone had gone home, I decided to take a trip out to see Certain Man’s garden.
It is really coming along nicely. 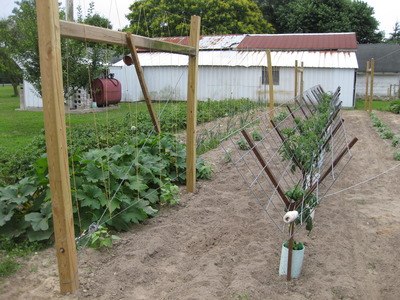 Some of you have wondered about the tomato racks that he was working on.
This picture shows them pretty well, as do some of the others.
This picture also shows his wonderful provision for his pole limas.
People can’t believe it, but we have learned that we need to space them out really far, and give them room to grow. (Thanks, Mark,jr.!!!) and then getting them to grow high seems to help, too.
This pole, wire and string creation is one of the most attractive, sturdy, and practical systems I have ever seen. 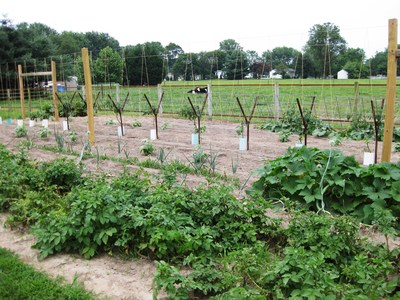 Another view.  Those are red potatoes in the foreground. 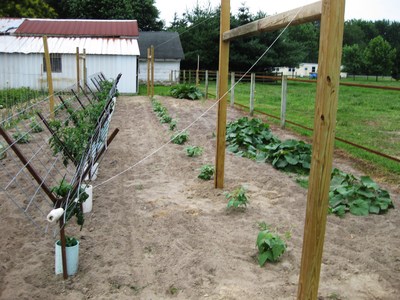 Here he has started the second row of poles for another row of limas.
This is the first year he has planted two rows.  I am so grateful for a second row.
I probably still won’t have as many as we would like, but it will be some better! 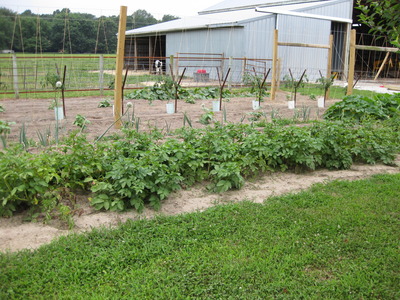 We already have:
fresh red potatoes
yellow squash
green peppers
onions
His tomatoes and butternut squash are healthy and strong
and his starts of rhubarb and asparagus are coming right along.
He’s a little upset because his ground cherry plants haven’t come up in their old location.
He would really like to get them transplanted.  He might just have to start them again.

It has been a great Sunday here at Shady Acres.
Tonight I remembered that I have a Case Manager coming in the morning.
I haven’t done a speck of my paper work for her yet.
Yikes!
Guess who’s gonna’ need to get up really, really early???