My good friend, Doris High at www.xanga.com/cerwindoris made an entry tonight about the local mud sale.  I started writing a comment to her, but it turned into its own Xanga post.  So Doris — here is a comment to your posting.

I wish that I could get more enthused about such things as garage and yard and mud sales.  It may be a defense mechanism– I am married to a man who calls garage sales, “Garbage Sales” and (unless he happens to see something he wants) usually gives them a clear berth.  I decided a long time ago that I might just as well  be content to not go.

However, the other month he was going by one here close to home and saw a grandfather clock in the yard.  He stopped and asked the people holding the sale what they wanted for it and I don’t remember  — forty or fifty dollars.

Certain Man noted the price, and went back his truck and called his clock repairman, Wayne Adams, of Tick Tock Tyme in Greenwood, with the information about the make and such.  Mr Adams told him that the clock was a good make– well worth four or five hundred dollars if it was working.  “You will have some money in repairing it,” he said, “But it is well worth it.”  Certain Man debated and debated with himself but finally decided to make an offer.

“You can have it!” the man said, and Certain Man found himself the surprised owner of an old grandfather clock.  He brought it home and it sat in the garage for several weeks until finally, he took the works in to Mr. Adams.  (For those of you who may not know, it isn’t necessary to haul the whole clock when a large clock needs fixing.  Most repairmen only want the inside “works”.)  A few weeks later, he fetched it home again, paid Mr. Adams $100.00 for his work, and eventually got around to putting the clock back together.

It was dirty, and we both worked at cleaning it up, shining the glass, and he had quite a time getting it level, but when it started striking!!! What a surprise!  You should have heard that tone!  It was phenomenal!  A deep, resonate Westminster Chime.

“I thought you had a perfect place for it,” I protested.  “On that short wall between the opening into the sun room and the window.”

“Well, yes.  I guess I could put it there, but I don’t know.” he said indecisively.  “Maybe I ought to just sell it.”

“Daniel, you can’t sell that clock!” I said with determination.

“And why not?” he challenged me.  “It has no sentimental value, and I could make some money on it.”

“Sell something else,” I said, heatedly.  “Of all the clocks you have, this one has the nicest sounding tone.  It comforts me, and it sounds so peaceful.  I like it.  Please don’t sell it!”

“So you like it, do you?” he asked amusedly.  “Well, in that case, maybe I’ll keep it.”  Sure enough, he put it out on the corner of the sun room where it has been ever since, and I hear it in the night like a lullaby on the quarter hour and a gentle sentenial on the hour.  So this is one sale that I am glad that he went to.  I like this clock so very much!  I wish I knew the stories it has to tell.  And you want to know what else?  I don’t really think that Certain Man had any intentions of selling this clock.  I think he just wanted to blame the fact that he bought another clock on me.  In this case, I have no objections. 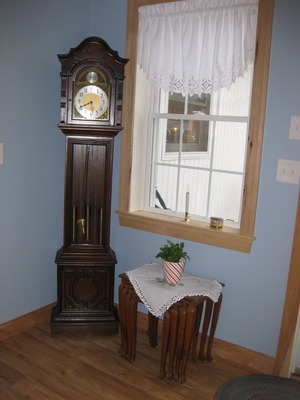