An afternoon with our Love Bug

The afternoon from the viewpoint of Love Bug . . . 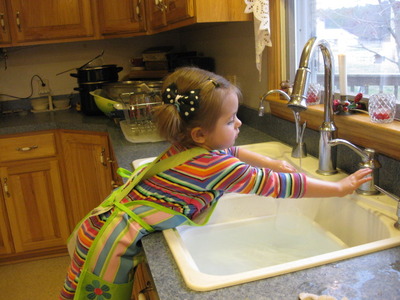 Grammy got me a new apron.
She bought it with a gift card from a fund raiser from Quentin Taray’s school.
It is big and waterproof and it will fit me for a long, long time.
I can play in the water at Grammy’s sink all I want!
(Well, as long as I don’t deliberately pour water on the cupboard or floor.  Then Grammy frowns and makes me get down.) 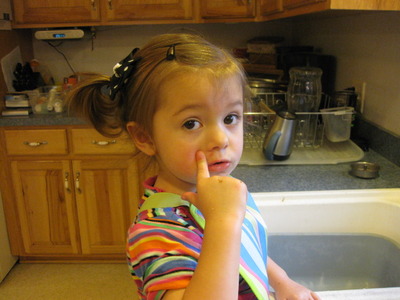 Today in the morning, I was running down the sidewalk when Daddy and Mommy took me for a walk.
My toe caught in the sidewalk, and down I went, Kershlam!
Do you see my ouchie right below my nose?
I’m trying to point at it, but my aim is just a little off.
I heard Mommy tell Grammy that I was “insulted.”
I’m not sure what “insulted” means, but it sure did hurt to be insulted! 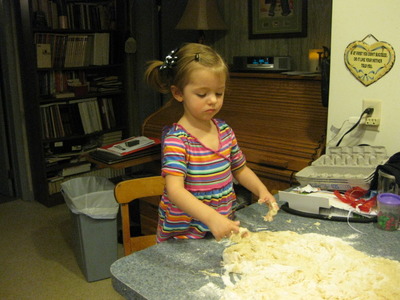 Grammy promised that I could help her make bread.
I really don’t like getting my fingers all goey, though.
It causes me to fling dough around in an energetic manner.
That makes Grammy say things I don’t appreciate,
Like “Charis, you can’t fling the dough.  It gets all over Grammy’s things.
Try to not shake your hands when you have dough all over them.”
Grammy helped me rub the wet dough off with dry bread flour.
That worked pretty well.
I actually thought that maybe this dough would be good to eat.
But after tasting it, I told Grammy, “Yucky!!!” 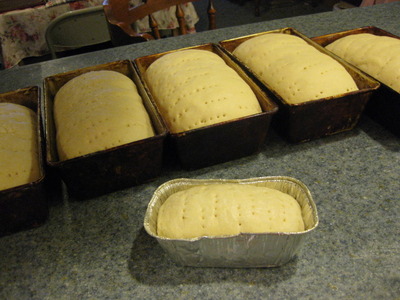 There was some extra dough somehow,
so Grammy sat me in my high chair and gave it to me to play with.
It was enough to make my own little loaf of bread.
I squished it and ate some and mixed some strange things into it.
But Grammy said all the germs would be killed in the baking.
She had a small pan for me to put it into, and she shaped it
and poked it with a fork, and after her bread was baked,
she put it into the oven and baked it for me.
Then we put it into its own little bag and I took it home with me.

We stopped to see Pappy and Achie Bontrager on the way home,
and I chased the cat around and around and built a tower with Pappy
and played and played.
So I was really, really tired.
And I went to sleep really, really fast when I got home.
Whew!
Being a grandbaby is hard work!

Tomorrow, I want to go down to Grammy’s house and
see Auntie Beebs!

(I think she brought me something from Thailand ’cause I’m her favorite niece!)

10 responses to “An afternoon with our Love Bug”