If you read my post from this afternoon, you know that we were out of electricity this morning.  Just to refresh your memory, here is what I wrote:

Around ten this morning, I heard a “pop” and the electric went off.  Our trusty farm generator started and I figured City of Milford would be along shortly.  At noon, I realized that the generator was still running, so I tried to call, and got all sorts of run around with “please leave a message and we will dispatch a vehicle immediately” sorts of things.  When I told Daniel about it, he wasn’t too pleased, especially after it was an hour later and I still hadn’t heard anything.  I tried again to call and got the same message.  I didn’t leave a message this time.  About 15 minutes later a very apologetic gal called saying that their phones had been all messed up and messages hadn’t been going to the right places, and she was going to send someone right out.  She did, and the electric was back on about 15 minutes later.  I don’t know what the problem was, maybe a transformer or something.  No one else was out in the neighborhood as far as I know.

The thing was, the truck was here an amazingly short time before the lights flickered, signaling that the electric was back on and the generator had entered its cooling down period.  I listened and heard the generator was still running, but in due time, it stopped, and Daniel said that was normal.  That the noise would continue about eight minutes following the return of power.  I was grateful that they fixed it so quickly, but I never did find out where they worked or what they did.

Daniel worked late tonight, but when he did get home and went out to do his chores, it was dark.  I was feeding supper when he came back in and stood in front of me with his hands in his parka pockets and that half grin on his face that tells me something interesting has happened on the farm we both enjoy so much.

“What’s up? I ask, interest piqued in spite of the rumblings in my tummy and my shaky limbs.

“Nobody said anything at all about why our electric was out.”  His sentence was more of a statement than a question.

“Because I found out why the electric was out and why it was just ours!”  His half grin and jutted jaw betrayed his enjoyment of dragging this out.

“What was it?”  I query, always playing into his game.

“It was a turkey buzzard!  Musta’ landed just right on the pole and fried himself.  It’s laying out there on the ground!”

“Yep!  Old turkey buzzard.  I can’t figure it out.  I don’t think I ever saw one sitting on that pole, but this one had to just put both feet at the right place and it was all over.”

“How did that make the electric go out?”

“Oh, it blew a breaker or a fuse or something.  As long as things shorted out up there, it would have done something.”

“Nope.  Still laying out there.  Why?

“Well, I think it’s a good story.  I’d like to get a picture of it.”  He was game for that, so I found my camera, he grabbed his flashlight, and off we went.

It’s a short distance to the generator shed, and sure enough, there was a black bump lying on the ground at the foot of the electric pole.  Daniel turned him over and suddenly said, “This isn’t a Turkey Buzzard!  It’s a Black Vulture!  Our Turkey Buzzards have a red head, but this one is solid black.  I’ve heard that they are moving into this area, but the closest that I thought I saw one was up near Hartly.” 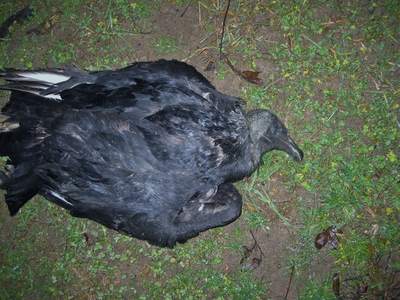 Sure enough, we came in, got the trusty bird book out and it IS (or WAS) a black vulture.  They aren’t as big as Turkey Buzzards, and actually, not as ugly.  But buzzard or vulture, this one was very dead!

“That sure should be a lesson to him,” said Daniel with a glint in his eye.

“I’m sure you are right,” I agree.  “I really don’t think he will ever try that again!”

And up the pole, there is a new, white, big fuse on the side of the transformer.  I guess it wouldn’t have taken long to change it.

I’m so glad it’s all fixed and working.  They also came and repaired the pellet stove today, so that is working and is comforting and it seems a lot more home-like.

Did I mention that I am just so glad to be home?

7 responses to “Another tale”