When Mr. Yutzy pulled into the driveway on Tuesday evening, I don’t think home ever looked so good.

“Well, hopefully,” he said without a shred of hope in that hopeful word.

I laughed at him, and said, “Well, that sounds confident!”

He looked a bit uncomfortable and muttered something about it being “five days that you’ve been sick!”

It has been a rough go round, and I’ve had days (and particularly, nights) when I wondered if I would get better.  In fact, Wednesday night, I was feeling so strange that I almost woke him up to tell him to “put me down cheap,” but then decided that it was the old Yoder Drama working overtime and thought better of it.  I can’t use up all my credibility over something as simple as a norovirus.

Which is what Middle Daughter, Hospice nurse, is sure this is.  I read the description in the newspaper and am inclined to agree.  So I’ve been trying the old tried and true remedies, and trying to stay hydrated, and getting lots of rest and making sure that the bathroom isn’t too far away at any given time.  I know, I know, TMI.

Sitting here in my beloved chair, sometimes skyping with my grandbaby (whom I miss passionately!) and trying to stay out of everybody’s way, I am comforted by an addition to our family room that has been a long time coming.  Those of you who visit often are very acquainted with our old wingback chairs that sit opposite the recliners in the family room.  We bought the two of them probably 20 years ago when Charlie Moore and Gertrude Finnegan were a part of our family.  Purchased through The Country Rest Home, they were supposed to be special geriatric chairs with waterproof, (albeit attractive) upholstery.  Charlie and Gertie were pleased as punch!  But Gertrude was a quiet “picker” and Charlie only knew one way to get into a chair, and that was to lunge and plop.  So, while we tried to discourage such behaviors, it wasn’t long until the fabric was very threadbare on the arms and the springs were in terrible shape.  Then Charlie passed away, and after some years had passed, we decided to reupholster both chairs in a different fabric.  I found an Amish upholsterer who had the perfect color (blue) in the nicest fabric, and he agreed to reupholster both chairs and fix the springs.  And only charge me $400.00 a piece.  For the life of me, I cannot understand why I EVER agreed to this.  I could have purchased new chairs for less than that.  Maybe I was tired of looking, or felt a need for Gertrude to have her “own chair” but whatever the reason, it was the route we took, and the chairs were beautiful.  Gertrude loved sitting in hers by the fire, and it could be said that the enjoyment she got out of her chair may have made it worth it.

But we had another problem.  Some time after the chairs were reupholstered, a little cat came into our lives and it took only a few times of her slashing her paws over the front of our chairs for the fabric to be ruined.  (And for us to decide that if she was going to be a house cat, she would need to be declawed!)  It wasn’t too bad at first, but as the years passed, the holes got bigger and bigger.  And uglier and uglier.  Gertrude died in 2005, but she loved her chair to the end.  I felt an attachment to the chairs because she loved them so much, and one day, Middle Daughter took it upon herself to mend those chairs.  It turned out surprisingly well. After about a year or so, the first one she did came apart, but she got busy and fixed that and I thought we were set.

But more and more I found them to be uncomfortable and a few weeks ago, I looked over and saw a spring hanging out of the bottom.  “H-m-m-m-m-m,” I thought.  “This might be a problem that Oldest Son, the furniture man, could help me with.”  I mentioned it to him when he was home, and he said, “Just let me know.”  So I suddenly remembered last Friday and I texted him and asked him if there might be a set of chairs in Troyer’s Bargain Basement that would fill the bill.

He called me on Saturday evening with that lilt in his voice that always makes my heart sing!  He had found something!

“I don’t know, Momma, if this something you’ll like or not, but I found two small recliners, blue, in the bargain basement.  I think it would work . . .”

I asked him all about them, and got more and more pleased all the time.  They were the right color, swivel rocker recliners, a matching pair, something they rarely have in the bargain basement.  Of course, there was that important question, “How much–??”

“Well,” he said, and I could almost hear the delight in his voice, “we just ran a sale on recliners, and with my employee discount I can pretty much get you two for the price of one.  They are really good chairs!”

I was so excited.  He took us into the shop after we ate supper than night and I got a look at them.  I was tickled pink!!!  Yes, I did want them.  Very much so!

Later that evening, I was telling Eldest Daughter, Sweet Mama, (or somebody!) about them and mentioned that they weren’t La-Z-boy.

“Southern MOTION, Mom!”  Interrupted my amused Eldest Son from across the living room.  “Southern Comfort is whiskey, and I promise you aren’t getting that from me!”

“Oh,” I said, into the phone, properly chastised.  “Southern MOTION.”  And then across the room, “And I’m not wanting any whiskey from you!”

We brought them home, set them up, gave the others away to the first person who came and got them (Friend Emma did!) and I am just so happy with these. 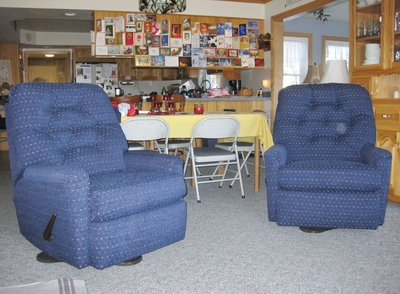 I look forward to lots of great conversations with friends around the fire in days to come.  Just give me a few more days.  I hope to be all better soon!