My Daddy’s youngest brother, Jesse, married my Sweet Mama’s sister, Gladys.  Unkie posted a picture of their family, taken around the same time as ours.  I know that some of you would be interested in this picture, as well. 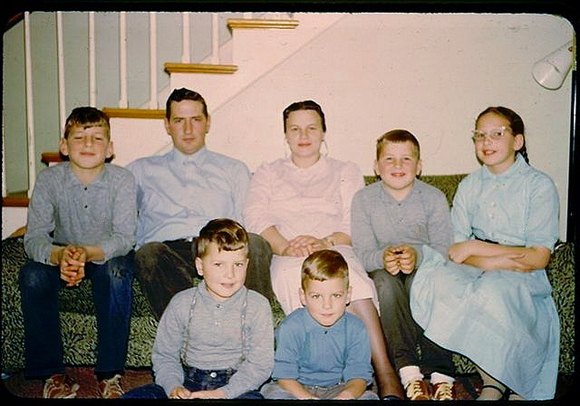 On the couch, from left to right:  David, Uncle Jesse, Aunt Gladys, Paul and Shirley
In front:  Jonathan and Robert

Later, two more children were added to the family, Joseph and Naomi.
Tragically, Robert and Joseph were killed in an automobile accident on April 24, 1977.
I often think about my young cousins.  Robert had just turned 18, Joseph was 13.
I wonder what they would have become.  I wonder how they would have affected the world for good.
But the one thing that Uncle Jesse and Aunt Gladys have taught me is this:
There are things far worse in this old world than having two sons safely HOME.
I cannot begin to imagine their grief.
But they have exampled their hope.
And the strange thing about hope is this:
It is contagious!