We had a birthday party for our Oldest Son on Saturday evening.

He was born on Wednesday, JULY 28, 1982 at 3:46pm and weighed in at 9 pounds, 12 ounces — a beautiful chubby baby — except that he was clearly in trouble.  He was as blue as he could be, and so they allowed me a quick hug, and then hustled him off to the NICU at Mt. Carmel Hospital in Columbus, Ohio. 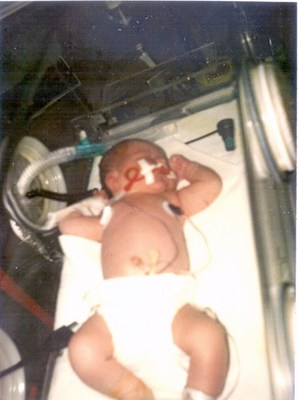 He needed oxygen for a while, and they were waiting to see “if the cultures grew anything.”  In the first two days, I would trudge down to the unit to hold him, nurse him and wonder how so plump and beautiful a baby could really be so sick.

The hospital wanted him on antibiotics, but he seemed to be fine, and they finally allowed me to bring him into my room with me.  That was a wonderful day, indeed. And then the
cultures didn’t grow anything, so they said we could go home. 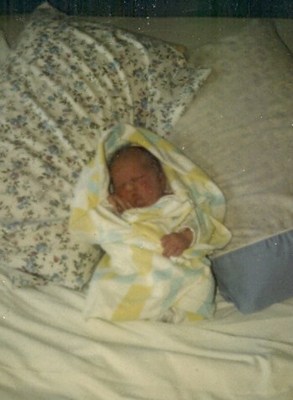 He was a snuffling, squggly baby.  So very precious.
This picture was taken of him propped up in the bed
just before we left the hospital.  I have wished and wished
that things had been different for us at this particular time,
but we were so poor that we felt we could not afford the
“new baby” pictures that the hospital sold.  The decision
was hard for us, but we really didn’t see how we
could manage to pay for pictures, send Christina to
Christian Day School, and still
pay our part of the hospital bill. 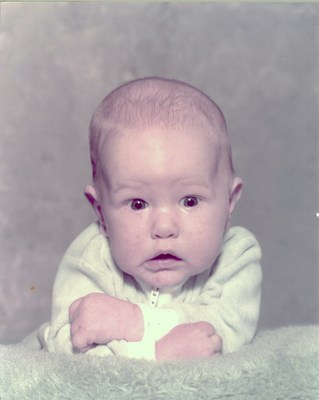 So, we got a special at Penneys when he was six weeks old.
Those old Penneys portraits
really lost their colors, didn’t they?

He was a happy baby — and we enjoyed him so much! 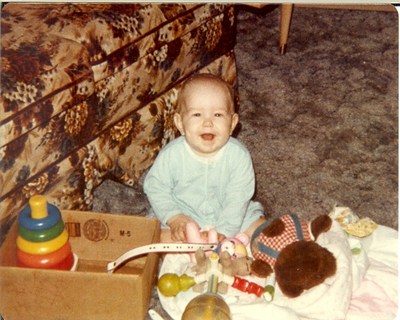 He loved to sit by the couch and play with his box of toys. 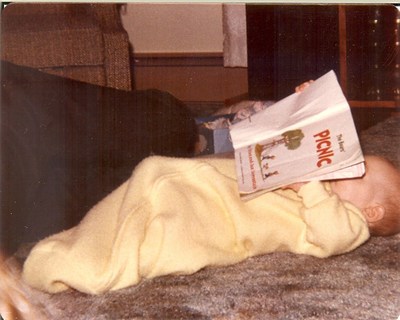 He learned to read at eight months. . . 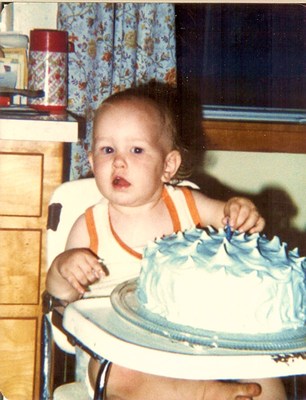 And the day came when he turned one.
The picture that was taken right after this one shows him
wailing unrestrainedly.  He had put his finger into the flame
of his candle somehow.  Yes, we were watching him
carefully.  He was just too quick for us. 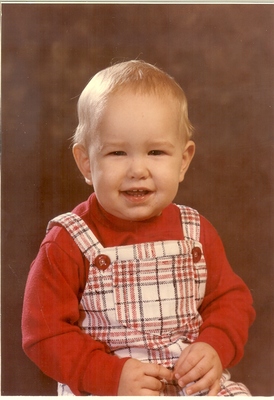 Just before we moved to Delaware, they took pictures
at the school where Christina was a student.  I took Raph
and Deborah in for their “preschoolers pictures” opportunity

“MOM!” the girls say over and over again.  “We can’t
believe that you would dress Raph in such an ugly out-fit!”
Well, when you sew your kids clothes yourself,
and even make t-shirts for them, and so does
everyone else you know, your idea of what is “ugly”
and what isn’t gets warped somehow, I guess.
I always liked the above picture of him at about 14 months.  And dear, dear daughters of mine, I even like the outfit.  That I made myself.  Probably while Chris and Deb ran interference specifically  designed to cause a mama to tear out her hair — I mean, stitches.

There are lots of pictures of Raph over the years, and I got
a little weary trying to decide which ones to include and which ones to leave out.  I decided to include this one yet.   His Uncle Mark was his prayer partner one year, and true to how involved and caring Uncle Mark is, he took him hunting.  I think Raph was out less than a half hour when he bagged a really nice buck.  It was totally unexpected —
by Raph, yes, and by some of the rest of us, too. 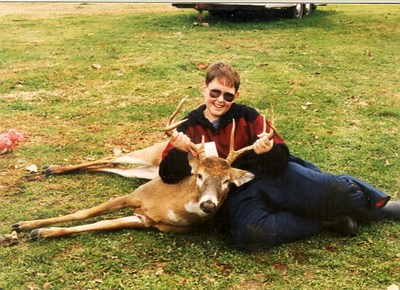 Pictures were taken, and the buck was mounted,
but with that one event, our son was satisfied.  I’ve often wondered what happened in his heart that day, but he put his gun away, and has never hunted since.  His daddy
has never had the heart to hunt big game —
but I’m not sure that even came into this.  He just seemed to know that it wasn’t something that he was happy doing.  And so he has seemed entirely happy NOT doing it,
and that is just fine with this chickenhearted mama.

And now he is all grown up
and has found the gal that is right for him,
married her and is establishing his own home. 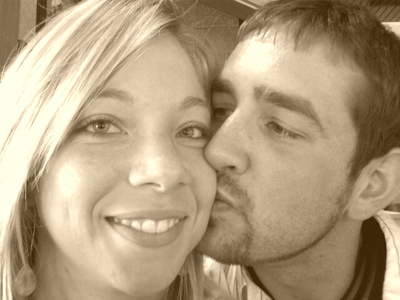 We are so glad that he was sent to our home.
He balances the intensity of (some of the others!!!

)
with his easy-going, good natured approach to life.  I used to say he was like a St. Bernard puppy —
with big feet and a happy-go-lucky enthusiasm
that was hard to resist.
You can see that he isn’t my little boy any more

But somewhere in my heart, he will always be.

Happy Birthday, Son!
I surely do love you!