It’s a chilly morning at Shady Acres.  Autumn is in the air, and Certain Man’s Wife’s Flowers are probably having some of their last days for this season.

The nights are chilly, and Certain Man is drawn to his fire ring.  He pulls the outdoor chairs into a circle and invites people to come and bring their own food.  “I’ll have the fire and hot water for drinks” I heard him say on the phone.  “If you want to bring something to roast — hot dogs, s’mores or whatever — help yourself!”  A friend works at Dover Millworks and he sometimes brings scrap lumber to throw into the outside woodbox.  Certain Man loves these pieces of wood that catch fire so quickly and burn so evenly.  He sometimes finds chunks of wood to cut up with his chainsaw (Is there a man anywhere that doesn’t somehow love a chainsaw???) and he cuts the chunks into smaller chunks that he can split with his trusty hatchet. 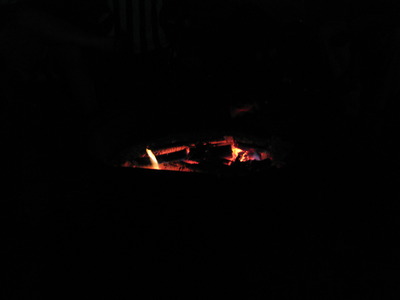 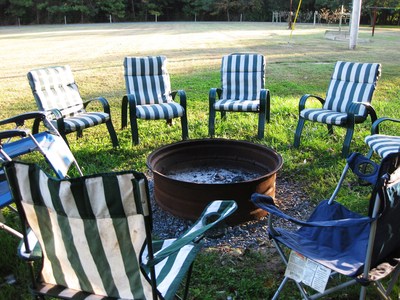 I took a morning tour of our yard this morning.
I am caught “flatfooted” by the things I saw and by the way Autumn is creeping up on us. 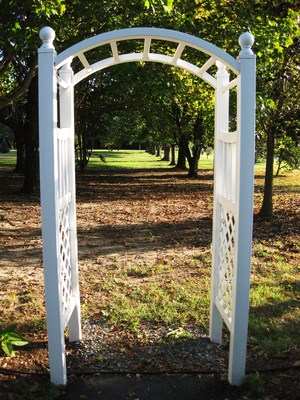 The little arbor that Certain Man put in towards the “Shady Way” frames the corridor of the seasons. 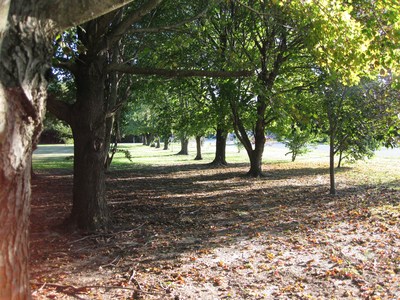 The leaves are already falling! 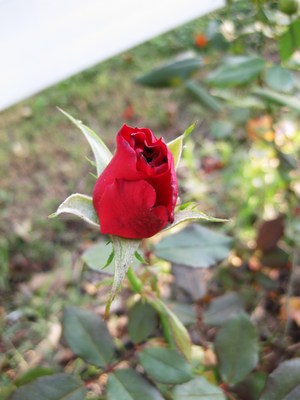 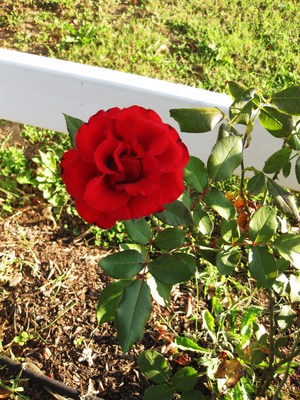 Over in the fence row, some of the roses are bravely trying to hang on! 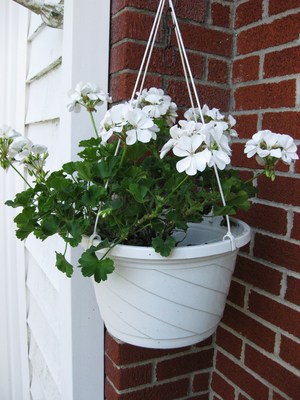 I babied and babied these geraniums when I first planted them.
More recently, I can say that I’ve scarcely remembered they were there.
But they’ve thrived — in spite of my neglect! 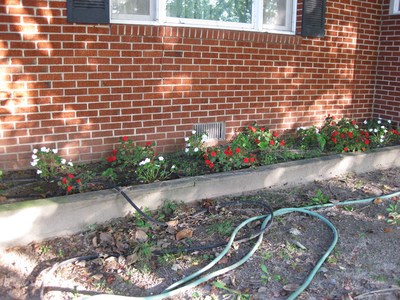 And these bad girls!!!  Let’s just say that they look better than
they ever have.  They just wouldn’t take off and grow!
Then we put a soaker hose on them and forgot about them.
Maybe they’re just late bloomers.

One of my favorite Fall looks is this Coleus: 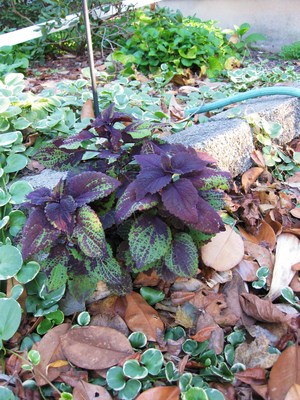 It grew up, volunteer-like, at the edge of our walk,
between the stones that edge our front garden and the black top.
I was loathe to pull it out, so I let it grow, and I’m so glad I did.

Just above the Coleus, I have this planter: 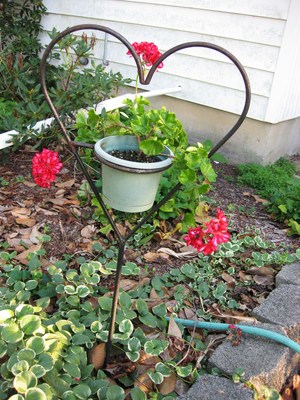 My spindly geranium in this pot has survived in spite of extreme hardship —
Mainly that the person responsible for watering it (CMW) often forgot.

I have a few other pots that are still blooming: 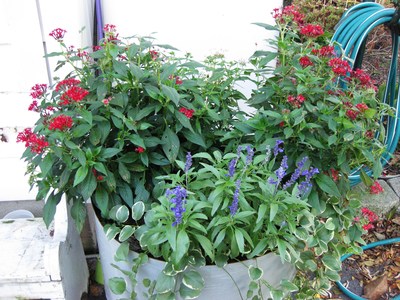 This is an old pressure tank that Certain Man cut in half and I filled with Miracle Grow potting soil.
These flowers have bloomed their hearts out.  Red and White Pentas, blue Salvia and Vinca Vine have proved to be
a far better choice than I thought they might be when I bought them all on clearance in July.

About six weeks ago, I cut back this container of petunias that had gotten scraggly. 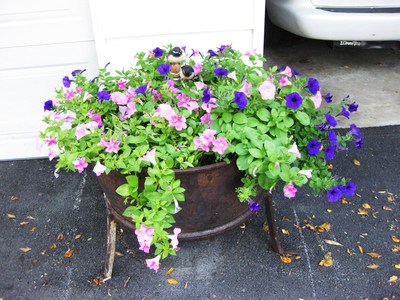 The result has been better than I dared hope for.
Also, I learned a few things about cutting back these forgiving flowers.
I think that next year, I’ll be quicker with the shears — but more discerning of the cut.

This is a strange container: 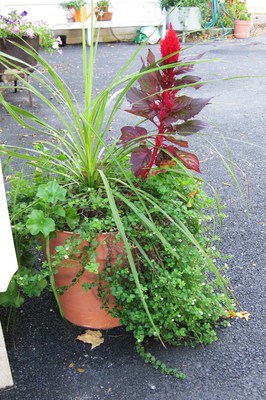 This Celosia is also volunteer.
When it started to grow in this container, I decided to see what it would do.
Sure enough, it got to be really showy! 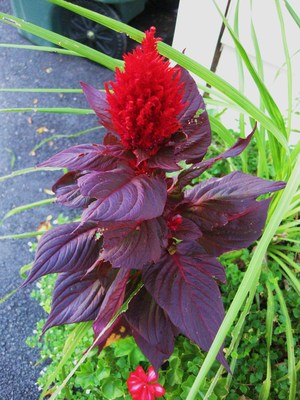 I wish there were a few more in the container, then it might be a little more balanced looking.
But everytime I see it poking its head up like an important soldier, it makes me laugh.
And it really does have the look of Autumn to it.
It’s another volunteer that I am glad I left alone! 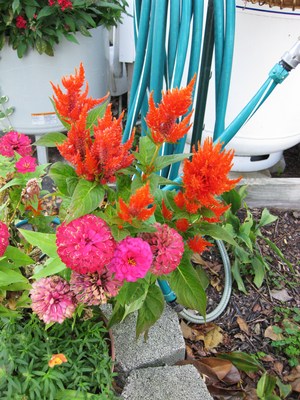 I have another container that I planted all my “left overs” in this year.
There are Zinnias, Snapdragons, Celosia, portulaca, even some lilies
in this brown bucket kind of thing.  The Zinnias and Celosia have done the best. 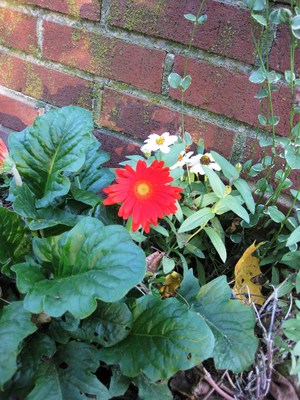 I planted this Shasta Daisy over by the barbecue pit.
I kid you not, it has been a mess all summer.
I thought at least three times that it wouldn’t live.
Now that the weather is cooler, and it is time to put the flowers to sleep,
It decided it was time to shine! 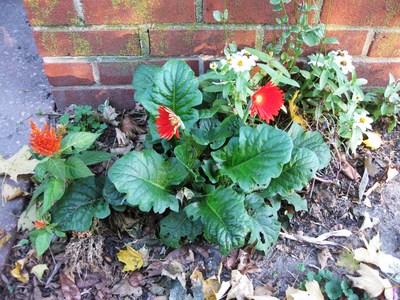 I have a few Zinnias in the same bed as the Shasta Daisy . . . 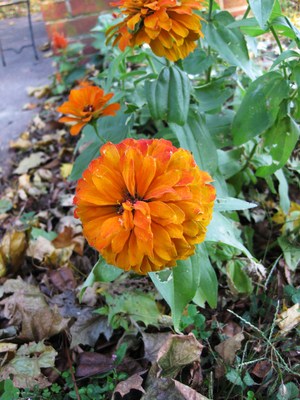 Most of them haven’t been my stellar picks,
But the color of this one is perfect for this time of year. 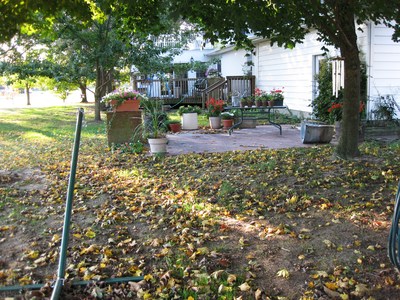 The leaves are beginning to fall in great numbers, even though there is plenty of green.
I look across the yard at the patio and appreciate the colors and the changing landscape.
There is a delicious nip to the air, and everything is changing every day.

I’m looking forward to the holidays.  Looking forward to having Youngest Daughter home for a week, and for the times for family to be together.  The nip in the air reminds me that Winter is coming.  Our family will experience the longest separation that we have so far, and that grips this mama’s heart with an icy hand.  I try hard to not think about it, and busy my hands and my head with the joyous preparations of the season.  The secrets of Christmas are already beginning to accumulate in my heart and in my Christmas room, and it delays the thinking (and dreading) of the coming parting.

Romans 8:38For I am convinced that neither death nor life, neither angels nor demons, neither the present nor the future, nor any powers,39neither height nor depth, nor anything else in all creation, will be able to separate us from the love of God that is in Christ Jesus our Lord.